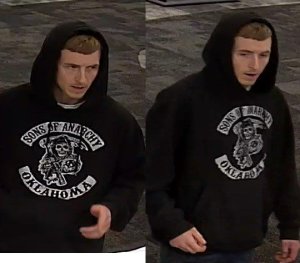 DEL CITY, Okla. (KFOR) – Del City police are searching for a robbery suspect who allegedly stole thousands of dollars worth of pills from CVS.

The suspect left the drug store with pills valued at over $6,000.

The suspect, featured in the above surveillance photos, is described as a white male with dirty blond hair, 5’6″-5’8″ tall, around 160 pounds and as wearing a black Sons of Anarchy hoodie, a clothing choice that Del City police had a bit of fun with in the Facebook post.

CALIFORNIA (CNN) -- Actor and director Clint Eastwood, a longtime supporter of Republican candidates, appeared to back Democratic candidate Michael Bloomberg for president and criticized President Donald Trump's behavior in office in an interview published in The Wall Street Journal Friday.

"The best thing we could do is just get Mike Bloomberg in there," the Hollywood conservative said of the former New York mayor, according to the Journal.

LAS VEGAS (AP) — Bernie Sanders scored a resounding victory in Nevada’s presidential caucuses on Saturday, cementing his status as the Democrats' national front-runner amid escalating tensions over whether he’s too liberal to defeat President Donald Trump.

The 78-year-old Vermont senator successfully rallied his fiercely loyal base and tapped into support from Nevada’s large Latino community as the Democratic contest moved for the first time into a state with a significant minority population.

NEVADA (CNN) -- Initial results in Nevada show Vermont Sen. Bernie Sanders has taken the early lead among Democrats in the Silver State caucuses, demonstrating how he has successfully harnessed the youth vote and now a sizable portion of the Latino vote to power his candidacy.

While polling is notoriously difficult in Nevada, Sanders and former Vice President Joe Biden have jockeyed for the lead, with Sanders rising after his team built deep organizing roots in the state -- particularly within the Latino community -- some eight months ago.