COLORADO – A backcountry skier in Colorado had some pretty good luck this week after triggering an avalanche that swept him over a 25-foot cliff and buried him under four feet of snow. 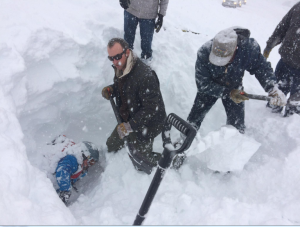 One of the people stuck behind the avalanche was an avalanche educator at the Silverton Avalanche School and a veteran of what’s called heli-skiing, in which skiers are flown via helicopter to remote, untouched slopes.

Michael Barney and his wife, Sallie, were driving home from Durango when they happened upon the scene just minutes after avalanche.

At first, they thought people were digging to clear the road, but quickly realized someone was trapped.

He grabbed two shovels he had in his car and went to help.

Barney says the skier’s partner had already located him with a beacon, after which he probed and dug about four feet.

“He had hit his partner’s helmet as soon as I got there,” Barney said.

At that point, the skier had been buried for about 15 minutes.

“I was able to use my hands to clear around his face and his airway and asked if he could breathe and he said yes,” Barney said. “That was a huge relief — I thought he would be unconscious.”

The man was using a device called an AvaLung that makes it easier to breath under the snow.

“He was okay and he was amazingly not injured and not even that cold,” Barney said.

The Colorado Avalanche Information Center has recorded almost 400 avalanches since the start of 2017.

There have been no fatalities.

(NEXSTAR/AP) -- Nearly 37,000 Americans died of COVID-19 in November, the most in any month since the dark early days of the pandemic, engulfing families in grief, filling newspaper obituary pages and testing the capacity of morgues, funeral homes and hospitals.

Amid the resurgence, states have begun reopening field hospitals to handle an influx of patients that is pushing health care systems — and their workers — to the breaking point. Hospitals are bringing in mobile morgues, and funerals are being livestreamed or performed as drive-by affairs.

WASHINGTON (NewsNation Now) — The White House on Wednesday pushed back against press reports that Federal Drug Administration commissioner Steven Hahn had been called to the White House to explain delays in approving a Pfizer coronavirus vaccine, noting that such meetings are routine.

The Commissioner of Public Safety announced that due to the winter weather, state agencies may temporarily reduce non-essential services beginning at 1 p.m. on Wednesday, Dec. 2 and ending at 10 a.m. on Thursday, Dec. 3.