OKLAHOMA CITY — The aunt of a stolen vehicle suspect says she begged him to stop during an hours-long chase.

“I call him just to ask him to see can you just stop? You’re making it worse,” said Ashley Rodriguez. “Everything you’re going to do…you’re magnifying it and just the stress of…he’s going to be shot.”

Rodriguez’s nephew Brenton Hager was taken into custody Friday after a pursuit which began Friday morning in southwest Oklahoma City.

The chase led officials through the metro for more than two hours.

Police say the vehicle Hager was driving was stolen, reaching high speeds throughout the chase and zipping through fields to escape officers.

According to Rodriguez, Hager was released from jail about a year ago.

She says at one point, he was in a maximum security prison in Lawton and described him as filled with “angst” when his family would visit him.

Rodriguez also tells News 4, Hager became a different person when he became addicted to drugs when he was around 18 years old.

According to online court records, he was sentenced on drug charges in 2014 and 2015. 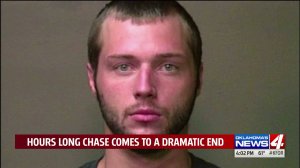 “It’s not an excuse but, 100 percent, the drugs. It really takes your soul and you become a completely different person,” said Rodriguez.

During the chase, Hager uploaded a Facebook live video.

Rodriguez was on the phone with him, pleading him to stop.

She tells KFOR, he told her he didn’t want to go to Oklahoma County jail.

“He just said, ‘I been trying to do my best and nobody’s there and I don’t want to go to county,” Rodriguez said. “I said, ‘They’re going to shoot you. They’re going to light you up.’ And he said, ‘That’s what I want.’”

The chase stopped near Indian Hills Road and Penn Ave. where multiple police vehicles were on scene; however, Hager would repeatedly drive off and then stop again. At times he even appeared to do donuts in the field.

“A part of me could think is it for attention? I just feel like he wasn’t in his right frame of mind and he was almost like I’m in too deep. I might as well go on and take it further,” said Rodriguez.

He was eventually caught and put into police custody after driving into a pond, leading police on a foot chase and then taken down with a taser.

One arrested after shooting at officer

78,000 pounds of infant formula arrives in US

WASHINGTON (NEXSTAR) — An Air Force C-17 jet touched down in Indianapolis on Sunday morning with 40 tons of baby formula on board. “This shipment provides enough formula to take care of 9000 babies and 18,000 toddlers,” U.S. Agriculture Secretary Tom Vilsack said. The formula was produced in Switzerland, trucked to Germany and flown to […]

Five things to know about the UFO hearing

A House Intelligence subcommittee on Tuesday held the first congressional hearing on UFOs in more than 50 years. Here are highlights from the hearing.

On Friday, the Department of Justice announced new efforts to try and deter a spike in hate crimes during the pandemic.

President Joe Biden is in Asia right now to meet with International Leaders. As he works to strengthen ties with U.S. allies, he’s also talking about American challenges.

One suspect arrested, another still outstanding from …