OKLAHOMA CITY (KFOR) – For Janice Crittendon, the reason for the season can be found on every wall. But while her decorations were on point, her television was on the fritz.  So the Cox cable customer called for help.

“They did set up an appointment to have a technician come out,” she said. “I was like ‘OK, send the tech out.’”

The technician sent a text, asking for Janice’s address before getting to work on the television upstairs. Not long after starting though, he seemed transfixed by a pill bottle on her dresser.

“He says, ‘Oh, by the way, I see that you have about $5,000 worth of money sitting on your dresser,’” Janice said, claiming the technician was referencing her pills.

Janice suffers from Lupus and is recovering from a spinal injury. Her prescription medication helps her get through the day, which is why the technician’s comment caught her off guard.

“So I decided red flags,” Janice said. “I need to get him outside where we were.”

The technician told Janice the job would have to be continued the next day.

Come nightfall though, as Janice settled in, an unsettling discovery waited for her on the dresser.

Janice gave him a call, and much to her surprise, she says he confessed. But Janice knew she would need proof, so she devised a plan to have a confession through text.

“I said, ‘Well, the phone seems to be breaking up, I can’t hear you good,’” she said. “’Could you just text me about what you’re saying?’”

A text would follow the next afternoon, with the technician, Kareem Stepanik, confessing again.

In a long paragraph, Stepanik said, “I did disrespect you” and “hope you’ll forgive me.” 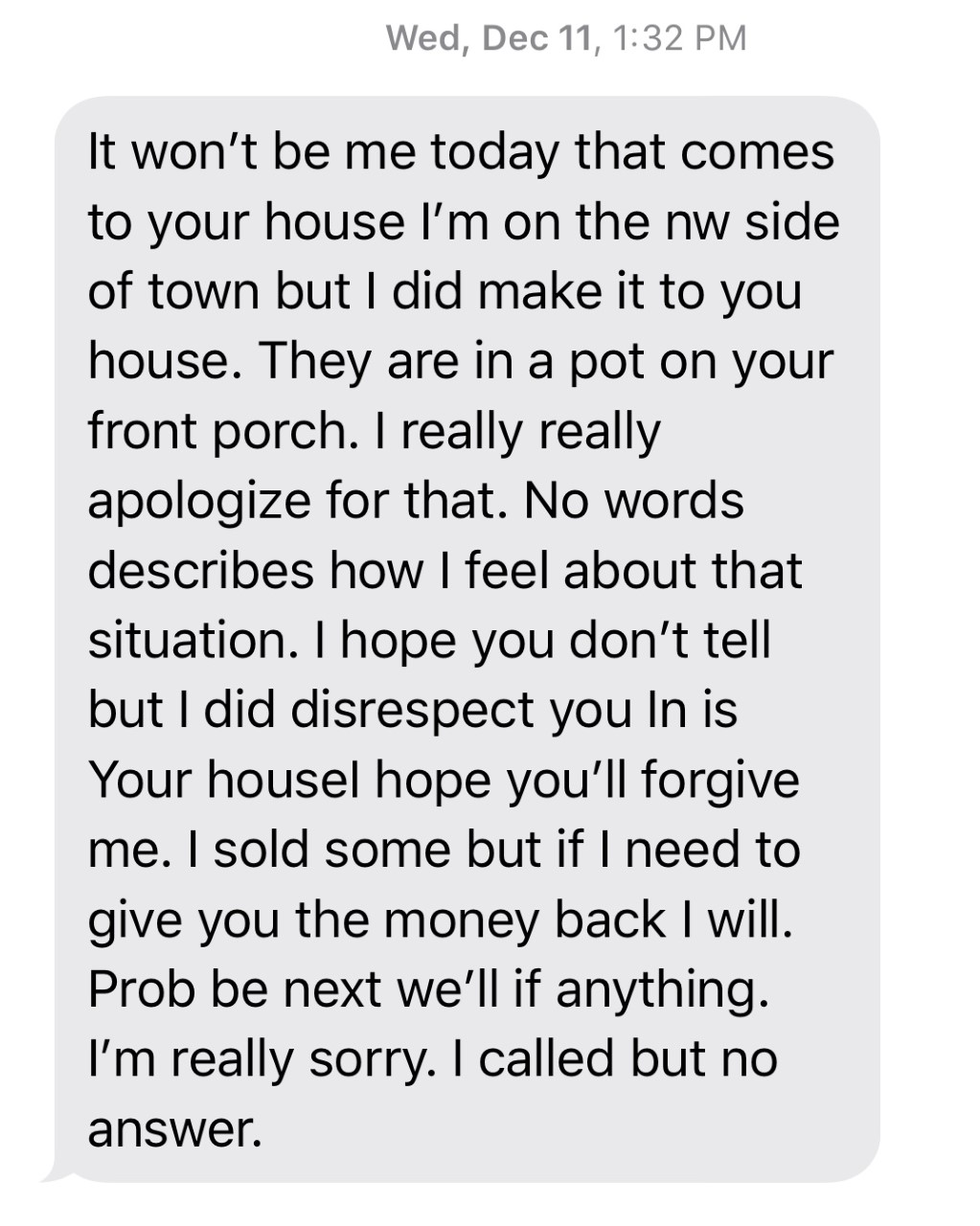 He also explained that he sold some of the pills, but left the remaining medication on her porch.

Janice discovered the bottle in a pot, beneath baby Jesus in her nativity scene.

“So I’m thinking, ‘Woah, this is pretty bad,’” she said. “What kind of person was this I just had in my house?”

Janice called both Cox and the Edmond Police Department.

Police tell News 4 they will soon be recommending that Stepanik be charged with larceny of medication.

Cox Communications tells News 4 that Stepanik worked with an outside contractor.

A spokesperson shared the following:

“I don’t have any details to share at this time other than there is an ongoing investigation with one of our vendors out of Edmond, and the police have been working directly with that vendor.”

Neither police, nor Cox, would share the name of the contracting company.

While Cox wouldn’t comment on specifics with Janice’s case, Janice says they did offer a 40% discount for a year.

For her though, this story is a warning.

“Somebody should have known he was capable of doing what he did,” she said. “That’s why I wanted to put it on the news, let people know. What if he’s already done this, but nobody’s turned him in?”

Edmond police tell News 4 that Kareem Stepanik is no longer working for the contracting company. They say an arrest warrant should be issued next week.

OKLAHOMA CITY (KFOR) - Community members held a candlelight vigil remembering those who were lost in the 1921 Tulsa Race Massacre and honoring the survivors. The organizer says it's important that such violence never happens again and that people of all generations learn from it. "I want to say remember, and I want to say recognize the harm that's done when we resort to this kind of destruction," Camille Landry,…

MYRTLE BEACH, S.C. (WBTW) – Even alligators enjoy cooling off with an occasional dip in the ocean.

Kim Wallace of Kentucky captured video of this gator on Friday while vacationing in Myrtle Beach.

(NEXSTAR) – A seat on Blue Origin’s first crewed mission to the edge of space sold for $28 million at auction on Saturday.

The winner will soon join Amazon founder Jeff Bezos and his brother Mark on the New Shepard when it lifts off from West Texas on July 20.

Amidst a sea of wheat, this Lamont, Okla., farm family pins its hopes to a first ever Sunflower Festival