“It’s disgusting for it to happen to anybody, but it really hits home when they get their family,” said Joe East. “They’re picking on the elderly mostly.”

‘They’, are a group of door-to-door pavers. Their alleged victim was Joe’s father Robert East, who got a knock at the door last month.

The paver stopped by the East home, claiming to have leftover asphalt from a nearby job.

“Offered him the job for a blacktop driveway,” said Joe. “He was happy at getting it.”

But once the work was done, the bill jumped.

“They told him the total cost was $95-hundred, they don’t have 95-hundred dollars,” said Brenda Strech, Robert’s granddaughter. “So they had to go to the bank and get a loan for the rest of it.”

In less than an afternoon, the Easts went from no plans for pavement to paying off an $8,500 loan.

This quickly raised red flags for Joe and Brenda.

“[Tinker Federal Credit Union] put the check in the company name,” said Joe. “There seems to be no company there to be able to cash the check.”

The paver, identified as Shannon Fox in a bill of sale, met Robert in the parking lot of Tinker Federal in Shawnee.

“Well he was mad he couldn’t cash that check,” said Robert.

“He pulled in front of their car,” added Brenda. “Stopped them and said, we need to go change the name on this check.”

Now Tinker is taking a 2nd look at this case, meaning that check is on ice.

“Right now it’s on hold, as we work with law enforcement to find out the legitimacy of the job completed,” said Matt Stratton, with TFCU. “And the business the check was made out to.”

So who is this business?

The bill of sale was made out to an ORW, or Oklahoma Road Works.

Some of their trucks though, proudly display Asphalt & Maintenance LLC. That company is based out of Washington State.

The current registered owner of that business, claims to have sold the company to Shannon Fox.

Fox also has ties to something called “Platinum Paving” out of Idaho.

At least one of the trucks spotted near Prague is US-DOT registered out of Idaho, and only registered to travel within that state. 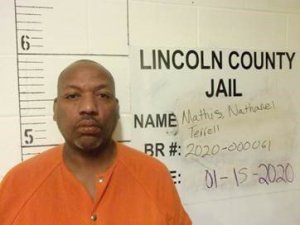 The driver of one of these trucks, Nathaniel Mathis, was arrested in Meeker. His charges include driving without a license, and providing false information to an officer.

We know Mathis also has out of state warrants, and his only identification was an Illinois State ID card.

So who exactly is ‘Oklahoma Road Works’? We called multiple times to find out but did not hear back.

“Tried to make contact with the people, they’re hard to get ahold of,” said Joe. “There’s no right addresses or phone numbers.”

We can tell you though, this is not a first for Shannon Fox. He was fined two years ago in Washington State, accusing of doing contract work while not being properly registered.

According to Washington state documents, Fox approached at least two households, charging one lower price, then another much higher price at job’s end.

One of those upset customers was 85-years-old.

“They said it was supposed to be asphalt,” said Robert. “It’s not asphalt, it’s recycled.”

The Easts did file a report with the Lincoln County Sheriff’s Office.

The In Your Corner bottom line, always be wary of door to door contractors. Make sure to get formal, detailed bid sheets, and do your research.

Also, make sure you are not pushed into getting work done before you have all the information you need.

OKLAHOMA CITY (KFOR) - State agencies are teaming up to talk to seniors across the Sooner State.

Starting this week, seniors can meet and speak with agency leaders, learning how to stay safe and scam free.

IN YOUR CORNER: Couples seek wedding pictures years after saying “I do”

OKLAHOMA CITY (KFOR) – Greg and Saura's wedding was a one of a kinda party.

But you'll find little evidence of that wedding inside their home. That's because nearly two years after their vows, many of the photos are missing.

NEWCASTLE, Okla. (KFOR) – Neighbors, fed up with a growing pride of peacocks across the street, called In Your Corner hoping to apply pressure for change.

Barbara Kalkbrenner and Adonna Hudson have lived out on South Rockwell for around 45 years combined.

US may ban TikTok and other Chinese social media, Pompeo says