The 79-year-old keeps ditching court, prompting judges in Oklahoma and Arkansas to issue new warrants for his arrest. 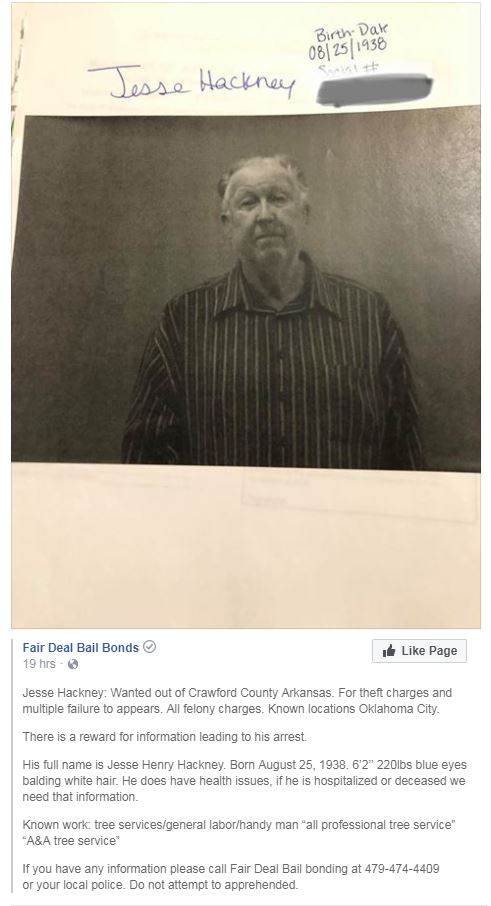 Toni McDonald couldn’t believe her eyes or ears and hit the record button on her phone.

In the video, you can hear her pleading with the men to stop cutting on her tree.

“I’m going to call the police and have you removed off my property,” she said. “He can hear me just fine. He’s ignoring me.”

Monday, we dropped back by Maria Nash’s home.

Hackney kept threatening to foreclose on her, even filed a lien against her property for payment on a job Nash said he didn’t have permission to do.

“I thought he was going to break [my window],” she said. “At 9:45 one night, he was banging on the window, [and] after you did that interview, it seemed like he did not try to contact me anymore.”

Hackney didn’t pursue things in court so, after a year, that shady lien he filed against her property expired.

Hackney’s got a bunch of people looking for him right now.

His bail bondsman out of Arkansas just put out a warning offering a reward for information leading to the tree trimmer’s arrest.

Hackney has some serious health problems.

Word is he’s still running his tree trimming business and advertising in the classifieds.

He was spotted in south Oklahoma City last month.

If you have any information on this career criminal, do not try to confront him and instead call police.

The convicted felon is accused of using shady tactics to get paid.

Nash Raquel said he keeps trying to bully her.

“Had to finally call 911 because he was banging on my windows,” she said. “I thought he was going to break the windows. I was very afraid.”

Hackney filed a lien against Nash’s property for payment on a job Nash said he wasn’t ever authorized to do.

She said all she wanted from him was an estimate and, when she yelled at him to stop doing the work, he ignored her.

Monday, we featured another customer, Toni McDonald, who whipped out her smart phone and started recording Hackney and his crew allegedly damaging her property.

In the video, you hear pleading with the men to stop cutting on her tree.

“I’m going to call the police and have you removed off my property,” she said. “He can hear me just fine. He’s ignoring me.”

McDonald’s stuck paying for the damages.

She said he keeps threatening her.

We asked attorney Roe Simmons to weigh in.

He said the mechanic’s lien is in place to protect contractors to make sure they get paid but it is possible for a contractor to abuse the law.

Only a bit of their information and a signature is required to file a lien with the county.

Hackney used a contract to file the lien with the county, but Nash said it was blank when she signed it.

“He goes ‘Just put your initials here indicating I gave you the estimate so, when I come back, we already agreed to it,’” she said.

Nash has a couple of options:

Hackney denies any wrongdoing and tells the In Your Corner team Nash knew good and well she was signing a contract and authorizing him to do the work.

We’ll keep you posted on the case.

OKLAHOMA CITY – Toni McDonald has a bunch of damage on her hands.

The widow hired Jesse Hackney and his crew to trim the large tree in her backyard.

She said they caused more harm than good, damaging her cellar door, shed, fence and a neighbor’s shed.

“It cracked it right here, and this was out like this when they dropped it on,” she said.

He’s also currently on probation for illegally carrying a firearm.

McDonald said she had no idea she was dealing with an ex-con.

She recorded some of the damage happening with her smart phone and pressed Hackney to pay for the damages.

In one of the videos, you can hear McDonald say, “If you don’t tell me [your insurance carrier], I’m going to call the police and have you removed off my property.”

We got the contractor on the phone.

He told us he didn’t remember McDonald.

He told us he is insured but then changed his story.

We told Hackney he shouldn’t be trimming trees either.

He said he’s retired yet, when he picked up our phone call, he answered by saying “Tree service. May I help you?”

Looks like McDonald’s stuck paying for the damage out of her own pocket.

The In Your Corner bottom line:

OKLAHOMA CITY (KFOR) – It's a scary new scam with an Oklahoma City connection, after an alleged fraudster was caught in the metro stealing hundreds to thousands from unsuspecting folks two states away.

Data breaches are nothing new in this digital age, but the number of Americans affected is alarming.

IN YOUR CORNER UPDATE: Family fights for family business in court

LINCOLN COUNTY, Okla. (KFOR) - For weeks we've monitored a local family's fight for their family business. Now, resolution could be on the horizon in Lincoln County.

We first introduced KFOR viewers to Mathew McRae last year. The local contractor was accused of botching a local veteran's home project, and not paying his concrete bill.

IN YOUR CORNER: Renters stuck living in water and filth seek help

IF YOU ARE A TENANT SEEKING LEGAL ADVICE, YOU'LL FIND NUMBERS AT BOTTOM OF ARTICLE