An investigation began after Texas and Southwestern Cattle Raisers Association (TSCRA) Special Ranger Bart Perrier received complaints from three separate victims in the area who alleged that calves had been stolen from their pastures.

Perrier discovered that the missing cattle had been sold through several different livestock auction markets in northeastern Oklahoma and southern Kansas. 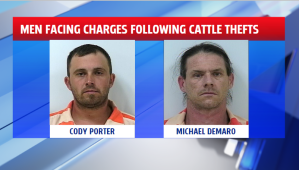 On June 5, Porter and Demaro were reportedly seen in possession of a stolen stock trailer loaded with stolen livestock near Shawnee. That same day, Demaro was later arrested by Pottawatomie County Sheriff’s Deputies after he attempted to evade arrest for several hours.

Porter was arrested on July 10 in Owasso by TSCRA Special Rangers and Oklahoma Department of Agriculture Special Agents. He was booked into the Logan County jail and later transferred to Pottawatomie County.

Both men are awaiting arraignment in Osage County.

After arraignment, Porter will be held on a $70,000 bond and Demaro on a $25,000 bond. The two men will face five counts of larceny of domestic animals (livestock), a felony that carries a sentence of up to 10 years in prison on each count.