Friday the 13th is perhaps one of the most universally despised dates of all time.

In fact, tens of thousands of the U.S. population could suffer from paraskevidekatriaphobia - a fear of the infamously unlucky Friday the 13th.

Many see the date as so unlucky, they insist on staying home that day.

The Stress Management Center and Phobia Institute estimates that the U.S. economy loses approximately $850 million each Friday the 13th as many refuse to travel, have surgery, buy or sell a home, or get married.

Fearing a loss of business, several hotels skip floor number 13, going from 12 to 14.

Some airlines also eliminate row number 13, while some airports skip the 13th gate.

So, how did the superstition begin?

Many theories exist but the most commonly agreed-upon answer dates back to biblical times, when the apostle Judas, the apparent 13th guest at the Last Supper, later betrayed Jesus Christ with a kiss to the cheek. 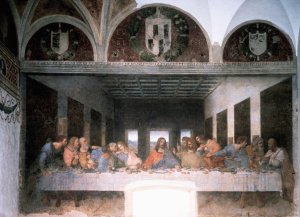 Jesus is also said to have been crucified on a Friday, and it is believed Friday is also the day Eve offered Adam the forbidden fruit.

More recently, many horrible events have taken place on Friday the 13th, such as the Chilean 1972 plane crash in the Andes when survivors had to eat dead passengers to survive the two months they spent on the mountain before their rescue.

The Costa Concordia cruise ship overturned in Italy in January of 2012, killing 30 people on board, while terror attacks in France claimed the lives of 130 people in November of 2015.

Economically, "Black Friday" is not just a major shopping day, it is also the term given to the October 13th, 1989 crash of the U.S. stock exchange.

On Friday the 13th in September of 1996, rapper Tupac Shakur died after being shot multiple times in Las Vegas.

Film director and producer Sir Alfred Hitchcock was born on Friday the 13th in 1899, but his first film failed. It was called "Number 13."

Several famous dignitaries reportedly suffered from triskaidekaphobia, the fear of the number 13, including Napoleon and former U.S. Presidents Herbert Hoover and Franklin D. Roosevelt, who refused to host 13 people at his dinner table.

Pagans also believe the number 13 is lucky, as it corresponds to the number of annual full moons.

And some positive sides to Friday the 13th, if you don't mind the unlucky stigma the date carries, weddings are sometimes less expensive. (Just in case it doesn't work out, divorce attorney rates do NOT go down on the 13th.)

Friday the 13th comes back for another visit in October.

WASHINGTON (Reuters) — The Supreme Court on Monday is set to take up President Donald Trump's unprecedented effort to exclude immigrants living in the country illegally from the population totals used to divvy up congressional seats.

The challengers to Trump's July directive include various states led by New York, cities, counties and immigrant rights groups. They have argued that the Republican president's move could leave several million people uncounted and cause California, Texas and New Jersey to lose House seats, which are based on a state's population count in the decennial census.

“The McRib has been a beloved menu item at McDonald’s since its inception nearly 40 years ago,” Vice President of Menu Innovation Linda VanGosen said in a release. “We’re proud to serve the McRib nationwide for everyone to enjoy.”

WILMINGTON, Del. (NewsNation Now) — Joe Biden's doctor says the president-elect suffered a stress fracture in his right foot and would likely be wearing a walking boot for several weeks.

Biden suffered the injury on Saturday while playing with one of his dogs and visited an orthopedist at Delaware Orthopaedic Specialists in Newark, Delaware, for an examination Sunday afternoon, his office said.

3 killed in crash near Lake Thunderbird

Election recounts, a historic ice storm in Oklahoma, and what’s next for President Trump