by: KFOR Looking Out 4 You Staff

“We are so proud our new media center was designed and built by Oklahomans who poured their hearts and souls into the construction,” said Wes Milbourn, President and General Manager of KFOR-TV and KAUT- TV.

The new facility was constructed based on a plan that encourages open collaboration between each department, allowing the KFOR staff to work and communicate more efficiently. The open environment improves workflow between teams of reporters, photographers, producers, and directors.

“This design enables us to serve Oklahomans with breakthrough technology. Whether we’re reporting the news or tracking deadly storms, we will now be working in the most technologically advanced broadcast studio, weather center and newsroom in the state, perhaps the nation,” said Natalie Hughes, News Director of KFOR-TV and KAUT-TV.

The 4 Warn Storm Center has been completely redesigned, enhanced and upgraded from top to bottom. “We’ve been working on this for years,” said Hughes. “Our weather team is grateful for the time, effort and financial backing that went into making sure they had the most effective technology to protect Oklahoma families.”

The state-of-the-art building also features protective glass designed to stop a two by four and other debris during severe storms. The thick walls of concrete and steel reinforcing are designed to be tornado resistant during Oklahoma’s toughest weather.

“We are asking KFOR employees to leave their families, come to work and help protect the public on the worst weather days,” said Hank Hundemer, Senior Vice President of Engineering at Tribune Media. “It was imperative that we provide our employees with peace of mind and safety while they are here, working to protect other Oklahomans.”

KFOR TV has been a groundbreaking station since it signed on the air in 1949 (as WKY-TV) and was the first station in the country to broadcast a station-issued tornado warning over the air in September of 1954. The U.S. government used to prohibit on air tornado warnings for fear it would spark widespread panic. The reality is, KFOR-TV has been warning Oklahomans of severe weather and saving lives throughout its history.

Many legendary personalities built the WKY-KTVY-KFOR legacy as well as numerous broadcast-firstS, link here for a look at that rich culture and history

Celebrating the 65th (in 2014) anniversary of WKY-KTVY-KFOR

The brand new studio, weather center, and news set were unveiled Saturday, August 19, for the 10:00 pm newscast. The graphics were designed by the Tribune Media Creative Services Team and the new news music and theme was produced by the award-winning team at Stephen Arnold Music. The KFOR newsroom provides the backdrop to the main studio.

Several conference rooms in the building pay homage to the history of Channel 4 and the incredible people who made it a legendary station. Among those spaces is the Barry Huddle Room in honor of the late sports broadcasting duo, Bob Barry, and his son, (BBJ) Bob Barry, Jr.

“Oklahoma’s News 4” produces 11 newscasts every weekday, and KFOR-TV is one of the strongest NBC affiliates in the country. KFOR.com and KFOR’s social media presence are dominant in the Oklahoma City area as well. “We are building for the future and we will continue to lead the way on all communication platforms in our fast changing world,” added General Manager Wes Milbourn. 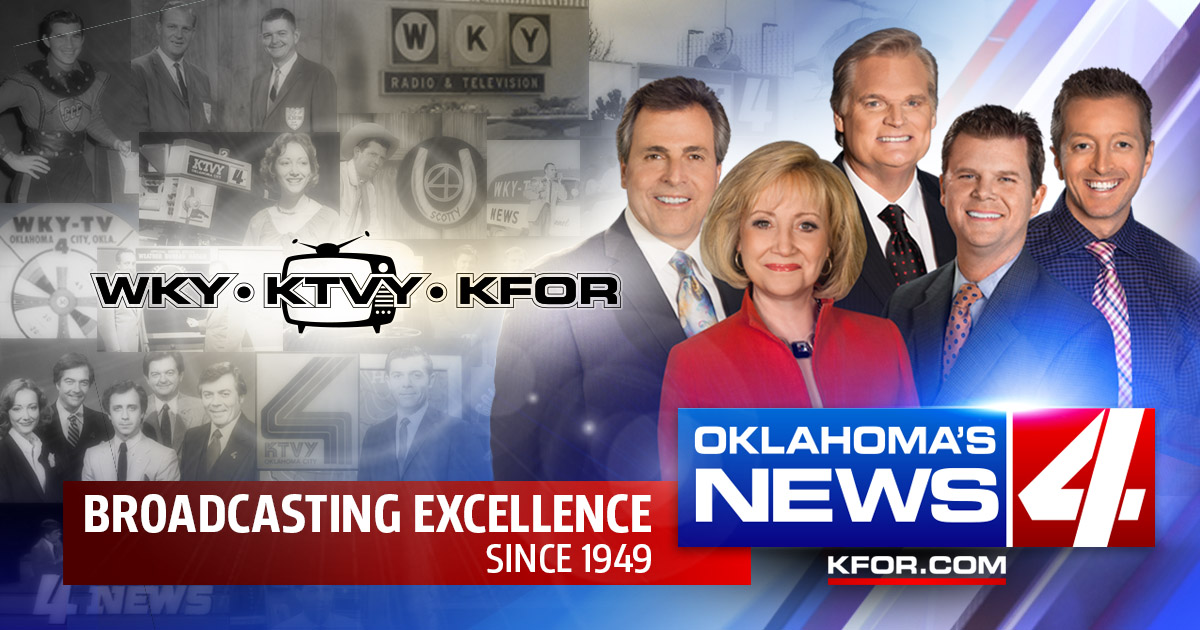