OKLAHOMA CITY – On September 4, a Lexington man was minutes away from his sentence in a Cleveland County courtroom for sex crimes involving a child when he went out to his car and never came back; today, he is finally behind bars.

32-year-old Joseph Stephens was set to be convicted of two counts of forcible sodomy, and one count of lewd acts with a child last Wednesday.

He was out on bond and even showed up to court that day to receive his sentence, but just moments before learning his fate, he told his family he needed something from his car and never returned.

“We will do whatever we need to do to bring him to justice. He left before he was convicted by a jury, but a jury did convict him of these charges,” Cleveland County Sheriff Todd Gibson told News 4. “They are very serious charges, and we’re not going to stop looking for him. The easiest thing he can do would be to just turn himself in now.”

A felony arrest warrant was issued by the Cleveland County Judge for absconding prior to a verdict being returned.

Officials say he and his wife, Tiffany- who was arrested for harboring a fugitive- were taken into custody without incident.

Both sit in the Oklahoma County Jail. Tiffany’s bond is set at $5,000. 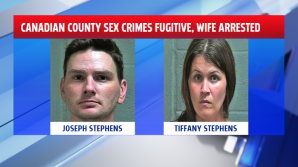 Fire contained to laundromat in OKC