MEEKER, Okla. — Two suspects charged after a teenage boy was found starving on a property near Meeker were bound over for trial on charges of child neglect, but not child abuse. 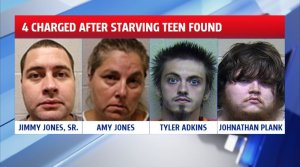 Jimmy Jones’ attorney Perry Hudson confirmed to News 4 Friday, his client was ordered to face trial on the child neglect charge but not child abuse after a preliminary hearing this week in Lincoln County. Amy Jones and Adkins have also been bound over for trial on child neglect charges, while Plank remains accused of failing to report.

According to defense attorney Elliott Crawford, every charge is viewed in isolation during a preliminary hearing. The purpose of the hearing is not to determine guilt or innocence but instead, whether there is probable cause to find the defendant over for further proceedings.

He said a lot can happen from the time charges are initially filed and the preliminary hearing.

“Either evidence goes missing, a witness recants what they told law enforcement, either a witness doesn’t show up, or a victim doesn’t testify at the preliminary hearing, or the state’s evidence is just not sufficient to bind over the defendant for trial,” Crawford explained.

During the hearing, a doctor with OU Medical testified of obvious signs of malnutrition he treated the 15-year-old victim who weighed just under 80 pounds. In July, then Assistant District Attorney Adam Panter told News 4 the boy was forced to live in a barn and ate twigs and grass to survive. At the time, prosecutors also alleged Jimmy Jones treated his son’s maggot filled head wound by super-gluing it shut.

“He been shot by his dad with a shotgun with birdshot, and x-rays revealed he did have shotgun pellets still lodged in his leg,” Panter said in a past interview with News 4.

Crawford said the remaining charges against the family are still considered very serious.

“Both of these offenses [child abuse and child neglect] have the same punishment. It carries zero to life or in the alternative, a term not exceeding one month in the county jail,” he said. “The important thing to realize, both of these offenses are 85 percent crimes which means that if you are convicted of either child abuse or child neglect you must serve 85 percent of that punishment before you are eligible for parole or earn credits.”

The state does have the option to appeal the special judge’s decision to the district court, Crawford told News 4.

We reached out to Allan Grubb, current District Attorney for Pottawatomie and Lincoln counties, multiple times Friday for a comment. Emails and calls have not been returned.

No child support, no hunting under Utah law

No child support, no hunting under Utah law

ATLANTA (AP) — A federal judge on Monday said U.S. Sen. Lindsey Graham must testify before a special grand jury in Atlanta that is investigating whether former President Donald Trump and his allies broke any laws while trying to overturn his narrow 2020 general election loss in the state. Attorneys for Graham, R-S.C., had argued […]