UPDATE: Officials say “due to an unforeseen scheduling conflict,” the Oklahoma City concert date has been canceled.

OKLAHOMA CITY – Lynyrd Skynyrd has announced that their farewell tour will make a stop in Oklahoma City in August.

The Southern rock icons’ “Last of the Street Survivors Farewell Tour” comes after a career that has spanned more than 40 years with over 30 million units sold.

The tour gets its name from their song, “The Last of the Street Survivors” and the band’s fifth studio album Street Survivors that is certified multi-Platinum by the RIAA.

The band will play at the Chesapeake Energy Arena in Oklahoma City on August 10. Their special guest is Gov’t Mule. 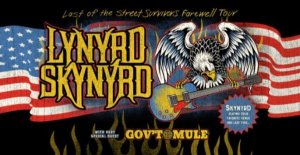 Adelaido Bernabe Urias, 68, was pushing his cart through a north Austin apartment complex when he was shot during a robbery in late June. Urias was taken to the hospital and died a week later from his wounds.

The balloons owned by the same tour operator went down separately and did not crash into each other, said Teton County Sheriff Matt Carr.

NORMAN, Okla. (KFOR) - The Norman School District Board of Education met in a special meeting Monday and the public put their comments in the open after Sunday’s announcement to start school virtually.

The board remained steadfast in their meeting Monday to stay with all-virtual schooling to start the year. They also pushed the start date back to Aug. 24.

Tracking the Tropics: Isaias continues to strengthen ahead of landfall