OKLAHOMA CITY – Oklahoma City police have released new details in what happened before a high-speed chase earlier this week.

According to a police report, it started Tuesday, just after 11 a.m., when officers responded to an auto burglary in progress at Bluff Creek Park near Hefner and Meridian.

When police arrived, an officer saw the alleged suspect break the passenger front window of a small SUV.

That’s when the man saw police and ran to his vehicle, fleeing the scene.

Oklahoma City police attempted to stop the man along I-35, but he refused to stop.

Air Comfort Solutions Chopper 4 was over the scene and captured the vehicle weaving in and out of traffic at a high rate of speed.

At one point, the driver started driving on the shoulder of I-35 near Waterloo Rd.

Officials say the vehicle was spotted going 100 miles per hour at some parts of the chase.

When the alleged suspect attempted to exit the highway, the vehicle lost control and jumped the median. It ended up hitting a speed limit sign and coming to rest on the curb. 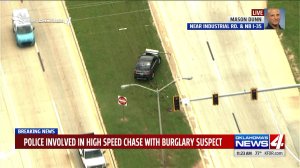 After that, the suspect got out of the vehicle and appeared to be attempting to run. However, the driver got back in the vehicle as multiple law enforcement officers arrived on the scene.

A second time, the suspect got out of the vehicle with his hands up before he got back into the driver’s seat.

A short time later, the suspect surrendered and was taken into custody. 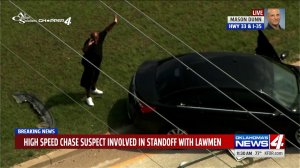 He was arrested and booked into the Oklahoma County on multiple complaints, including several for burglary in the third degree.