YUKON, Okla. (KFOR) – Authorities say a man who allegedly started a fire at an apartment complex has now been charged with the crime.

On Nov. 13, firefighters with the Yukon Fire Department were called to a blaze at the Cedar Creek Apartments. 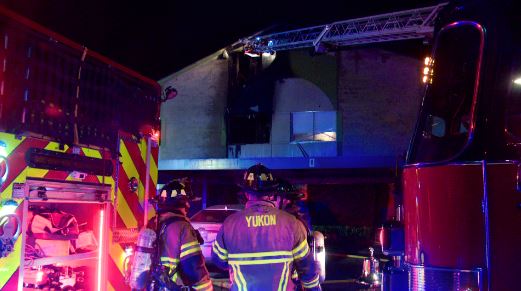 When crews arrived on the scene, they found an upstairs unit engulfed in flames. As firefighters put out the blaze, six families in nearby apartments had to be moved to different units.

According to the arrest report, officers with the Yukon Police Department heard from a victim who said that his unit was the one involved in the fire. He said he had been in the process of moving out and was planning to get the rest of his things when he learned that his apartment was on fire.

The victim said he had been contacted by a relative of 35-year-old Landon Anthony Proudfit, who asked if he was missing specific items from his apartment. The victim says the relative showed him several pictures of a grill, side table, and Christmas tree that all belonged to him.

When officers spoke with Proudfit, they say he changed his story, saying he was given the property, but then saying that the items were left outside so he thought he could take them.

Proudfit was charged with one count of first-degree arson and second-degree burglary.

PHOTOS: Bottomed out on toilet paper

PHOTOS: Bottomed out on toilet paper