POTTAWATOMIE COUNTY, Okla. (KFOR) – A man who was convicted of murdering an Oklahoma police officer has been sentenced to death.

On Friday morning, Byron Shepard was officially sentenced to death for the shooting death of Tecumseh officer Justin Terney in 2017.

The 22-year-old police officer was just a rookie when he was killed during a traffic stop.

Around 11:30 p.m on March 26, 2017, Tecumseh Officer Justin Terney pulled over a vehicle near Benson Park and Gordon Cooper.

During the stop, Byron Shepard lied from the very beginning, telling Officer Terney his name was James Bishop. At the time, Shepard was wanted for stealing a pickup and equipment from an oil drilling company.

Officer Terney told Shepard he needed to be honest and give him some identification, but Shepard ended up running into a wooded area.

You can hear Officer Terney screaming, “You’re going to get tased! Stop!”

They were both rushed to nearby hospitals, but Terney died from his injuries. He had been on the police force for less than a year. 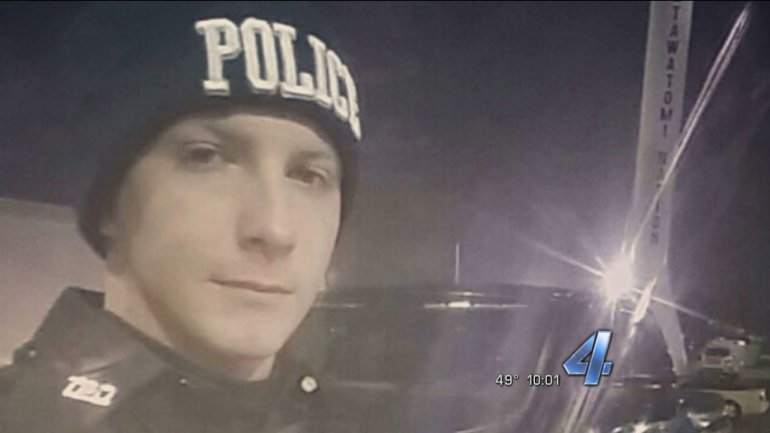 In November, a jury found Shepard guilty on all charges and recommended that he be put to death for the crimes.

On Friday, a judge agreed, sentencing Shepard to death.

EDMOND, Okla. (KFOR) – An elderly man made it out of a house fire unscathed Tuesday night.

Edmond firefighters were called to Tanglewood Drive, where a house was burning.

Two videos emailed in by our KFOR viewers show close calls of people almost being hit by falling tree limbs. That’s only the tip of the iceberg of what the second day of winter weather brought to Oklahoma on Tuesday.

OKLAHOMA CITY (KFOR) – According to OG&E, 90,000 customers have their power back on, as hundreds of thousands of Oklahomans are forced to wait for crews to reach them.

“We are over here, like, with hypothermia,” Katy Sadler said.