DEL CITY, Okla. – A man accused of stealing thousands of dollars worth of instruments from local students was found in an unlikely hiding spot.

Earlier this week, officials announced that an arrest warrant had been issued for 36-year-old Patrick Sean Hicks. The arrest warrant accused Hicks of second-degree burglary and false declaration to a pawn broker.

Authorities allege that Hicks got inside Del Crest Middle School with a contractor key that was issued to a heating and air conditioning company contracted to do work at the school.

Police said Hicks then cut a hole through the side of the band building to steal a number of musical instruments.

Later that morning, police said parents and children who were sledding on the hill behind the school discovered several instruments laying in the freshly fallen snow, suspected of being too heavy to carry.

“He left some of the instruments outside in the back of the property,” Rule said. “Some people had gone out there to take their kids sledding and noticed these instruments and called the police, which is where we found the burglary.”

Last week, police discovered that a stolen clarinet was pawned by Hicks at a metro store, claiming he owned the clarinet for six years.

On Thursday night, officials from the Oklahoma County Sheriff’s Office announced that Hicks had been taken into custody.

The Oklahoma County Warrant Team found Hicks hiding inside an A/C duct inside of a home. 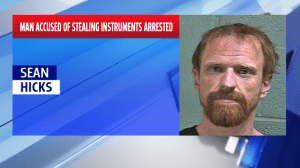 OKLAHOMA CITY (KFOR) – She’s only six, but an Oklahoma girl has been through a lot and is hoping to find a forever family like her brothers and sisters have found.

Kaitlynn is a tiny girl with a big personality.

LITTLE ROCK, Ark. (AP) — A coronavirus outbreak in the Arkansas Legislature has grown by two, pushing the number of lawmakers who have caught the disease in the past week and a half to nine.

The Oklahoma Corporation Commission reports that there were approximately 313,387 outages statewide as of 6 p.m..