EL DORADO, Ark. – A man wanted in connection to an Oklahoma City homicide that happened earlier this year was arrested in Arkansas, officials say.

The driver first told police his name was Wali Abdul Qadar, and that his American name was Wallace McCoy.

According to police, “a nationwide data search revealed no return on either names with the date of birth he provided.”

The man was arrested for obstructing government operations.

Police say they found drug paraphernalia and K2 after a search.

The man was taken to jail where at one point, he started having medical issues after “consuming some sort of narcotics prior to the initial officer interaction on the traffic stop.” He is being treated at a medical center in Arkansas.

Officials say fingerprints reveal the person in custody in Cheo McCoy, who is wanted out of Oklahoma City for a homicide that happened in February.

According to Oklahoma City police, McCoy’s arrest is in reference to a homicide that took place on February 10 when police were called to the area near N.W. 16th and Meridian after neighbors reported hearing gunshots in the area.

When officers first arrived on scene, they were unable to find a victim or the shooter. However, minutes later, officials with St. Anthony’s Hospital called 911 to report that a gunshot victim had just arrived at the emergency room.

The victim, who was identified as 39-year-old Matt Bowens, was ultimately pronounced dead at the hospital.

Two women were arrested in connection to the shooting; 29-year-old Erika Schwengels and 33-year-old Kristen Brooks. Both were booked into jail on a complaint of first-degree murder. 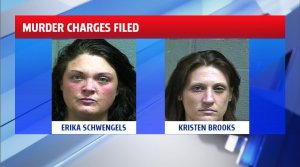 According to the probable cause affidavit, the alleged suspects took Bowens to purchase meth. When they arrived at an apartment complex in the area, Schwengels said that Bowens and Brooks got out of the car while she waited in the passenger’s seat.

Oklahoma City police have been notified and will proceed with the extradition process at a later date.