UPDATE 11:04 A.M.: Duke Surrell has been taken back into custody. Collin Pantoja has reportedly been sighted, but is still at large.

Police say it is believed the two inmates, Duke Surrell and Collin Pantoja, stole a vehicle from Mangum. The vehicle was later found abandoned on Russell/Centralvue Road.

Surrell and Pantoja were not found in the area. 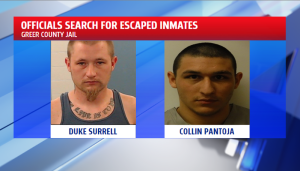 Mangum police believe they may be going west, possibly to Hollis, but an actual location is unknown.

Duke Surrell has hazel eyes, blonde hair, weighs around 175 pounds and is approximately 5’5″. He does have tattoos, including “S” on the right side of his neck, flames on his neck, tribal style.

If you see either Surrell or Pantoja, call 911 immediately and do not approach them.