OKLAHOMA CITY – The medical examiner’s office has ruled the death of a man, who caused a fatal crash involving a Konawa school bus, an accident.

Isaacs, five of her junior high softball teammates and a coach were heading home from a game in Okemah on Friday night. The bus was traveling southbound on US 377, just south of Bowlegs, at around 7:15 p.m. when the Oklahoma Highway Patrol said an SUV heading northbound, driven by John Edward Tallbear, crashed into the bus.

Officials said Tallbear, 61, tried to pass another vehicle, only to cross into the bus’ path. Both drivers swerved to avoid each other but struck each other, head-on, bursting into flames. 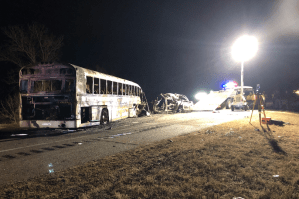 Tallbear, Isaacs and a third person in the SUV were killed. The others on the bus were taken to the hospital to be checked out and released.

The ME said Tallbear’s probable cause of death was acute multiple blunt force trauma.

The Konawa School District said Tallbear was driving intoxicated when he crashed into the bus.

News 4 is still waiting on the official toxicology report from the OHP whether to indicate if Tallbear was indeed intoxicated.