OKMULGEE, Okla. – The investigation into a woman’s body found in a suitcase in a dumpster continues to unfold.

Officials believe it could belong to a missing woman out of Colorado.

It all started Wednesday when a gas station employee found a human torso in the suitcase in the dumpster near a Walmart in Okmulgee.

1-year-old Winter Mead had been reported missing out of Boulder, Colorado, along with her mother, Ashley Mead, 25.

Wednesday afternoon, Winter Mead was found in Okmulgee along with her father, Adam Densmore, 32.

Ashley Mead was reported missing after she didn’t show up for work.

They say it’s possible he left her remains in multiple states, and are still missing body parts.

Densmore is accused of murdering her.

Densmore’s exact travel route from February 12 through February 15, is still under investigation.

Detectives believe on February 12, he left Boulder, Colorado. From there, he may have traveled to Raton, New Mexico.

After New Mexico, they say could have then traveled south through Texas, then to Louisiana, Arkansas, and then to Okmulgee, Oklahoma.

It is believed that a portion of her body could be in a purple suitcase similar to the picture below. 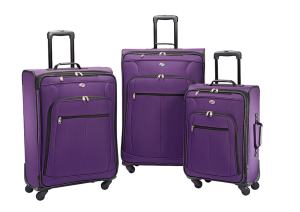 Boulder Police say if you know anything or see something, immediately contact authorities.