LITTLE ROCK, Ark. – With two bad marriages behind her and debt that came with them, Cara Brookins needed a place to stay for her and her four kids.

Brookins, who writes young adult novels for a living, didn’t have the money to hire builders.

So, she built one by herself — using YouTube tutorials. 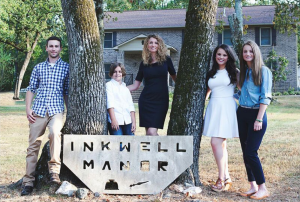 “Things can get a little expensive when you are escaping an abusive relationship and have four children,” Brookins explained.

Brookins’ initial intention was to buy a home, but she found they were either too expensive or just too small.

So after careful research and tutorials on YouTube, Brookins brought an acre of land in Bryant, Arkansas, a suburb of Little Rock, and began building.

She started in 2008, watching videos in the evening, making a list of the tools she’d need.

She tallied the cost of supplies for her dream home: $130,000, so she sold a small property she owned.

Her children, Hope, Drew and Jada and Roman helped along the way.

“My oldest son, Drew, helped me draw the blueprint to get approved by the city,” Brookins said.

Brookins and her children worked on the house for nine months., along with the help of a friendly firefighter.

“The entire process brought our family closer together and we learned that nothing is impossible. We found new hope,” said Brookins.

Brookins called it Inkwell Manor because, she said, she wanted a place where she could write and one that reflected her passion for books and writing.

The house has five bedrooms and a library.

The experience is now the subject of a book, “Rise: How a House Built a Family,” which comes out January 24. Brookins said she hopes the book inspires others to never think small.

“I never intended to write a book. I was ashamed. But I think it is important to shift your perspective on any negative situation and do something big,” she said.

“Never think of your situation as a solo journey,” she added. “You can heal and grow together with your family.”