NOBLE COUNTY, Okla. (KFOR) – Unusually high amounts of rain have caused buses from Morrison Public Schools to slide off the road into ditches; now the school system might have to make bus route changes to keep students safe. 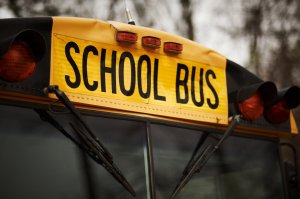 “We’re having buses that are unable to get down some of the roads,” said Superintendent Brent Haken. “They’re sliding off the road into the ditch. So then students and the driver are there until we can get another bus to them and they can then walk to that bus, or until we can pull that bus out of the ditch.”

The rural roads that Morrison’s six bus routes run on have not had sufficient maintenance, which has caused the roads to not have a crown.

“The road doesn’t have a crown anymore, so the water can’t drain from the road,” Haken said.

Some of the ditches along the rural roads are quite deep. Haken said there’s concern that a bus could slide off into a creek.

The ultimate solution to the problem is getting state legislators to fund maintenance per road mile, Haken said. But until that happens, changes to the bus routes will likely have to be made.

“Our possible change is centralizing bus stops and not stopping at every house,” Haken said. “We’re going to find out if there are bus stops we can get to easier to make it safer for the students, but what that does is pass the responsibility to the parents to get them to the stop.”

Morrison Public Schools officials issued a letter written by Haken to parents. That letter was posted on the school system’s Facebook page on Wednesday.

“We have seen abnormal weather conditions this year and with that, a neglect in some of our district’s road maintenance. As the roads in our district become more deplorable, we are evaluating the current bus routes. This could possibly mean centralized stops for some of the roads our bus routes drive on as some of these roads are proving hard to navigate and impassable,” the letter states. “This will be a very difficult decision as we move forward. With the consideration of the children’s safety and the cost of the continual damage to buses, which will, in turn, result in more safety concerns, hard decisions may have to be made in the near future.”

Morrison has six bus routes, each transporting an average of 55 kids. The routes mostly pick up kids in Noble County, but some routes include kids from Payne and Pawnee counties.

If bus route changes are implemented, those changes won’t likely take place until the second week of November, Haken said.

“I realize that many of you depend on the bus routes for your child’s transportation to school and this weighs heavily on the decisions that have to be made. Even more so, we simply can not risk the safety of our students,” Haken said in the letter.

Parents have been supportive, Haken said.

“They understand that safety should be the first consideration,” he said. “They’re doing everything they can, and we’re trying to work with them. It’s a great community for that.”