MUSKOGEE, Okla. (KFOR) – Rushing floodwaters from the Arkansas River caused many in Muskogee to worry about the fate of a historic submarine. Now, a state official is getting involved in hopes of saving it.

The USS Batfish emerged from seven different combat patrols during World War II, and has an unofficial record of enduring 125 depth charge explosions in one terrifying eight-hour period.

Once the war was over, the USS Batfish found its final resting place in the Port of Muskogee, along the Arkansas River.

As severe weather caused the river to flood, the waters also lifted the Batfish off of its spot.

In July, officials told KJRH that the submarine now sits 12 feet uphill and its gangway, which stuck out from the stern, is twisted and unusable.

Engineers say it is actually in a good location, but it will still take about 120 semi-truck loads worth of dirt to secure the 1,500-ton submarine. 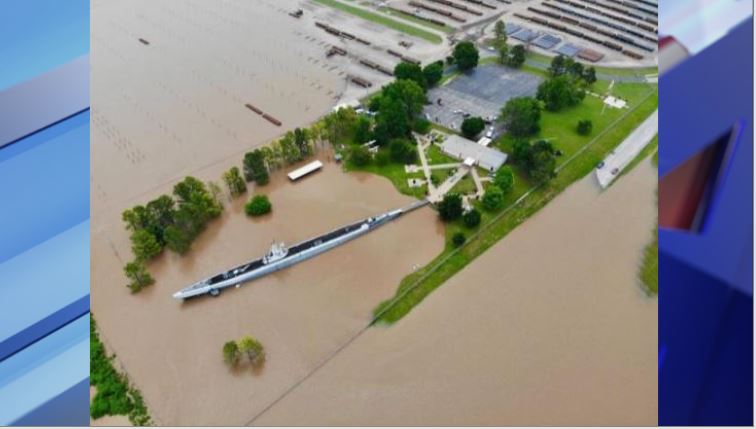 Now, the Muskogee War Memorial Park is hosting a trivia night to raise the needed funds to stabilize the ship.

'Save the Batfish: Trivia Night with Lieutenant Governor Matt Pinnell' will be held on Nov. 22 from 6 p.m. to 10 p.m. at the Muskogee Civic Center.

“Our board and staff cannot thank Lieutenant Governor Matt Pinnell enough for assisting us with our cause. While our museum may be considered a smaller organization, the USS Batfish remains one of Oklahoma’s only naval heritage points and serves as a tool for educating the public about military service and the dedication it takes to live in a submarine for 65 days at a time. The record-leveling flooding in May affected the City of Muskogee significantly. While our
organization was able to keep the USS Batfish from heading down the river to disaster, the submarine is currently unstable and rolling toward its side. To repair and ensure that the submarine will never break loose again will require substantial funding and support. Through events like these, grants, and online fundraiser sales – we are getting close to our goal to match with FEMA,” said Brent Trout, Executive Director of the Muskogee War Memorial Park.

Organizers say happy hour with the Muskogee Brewing Company begins at 5 p.m., and the brewing company will be debuting a special Batfish Beer at the event.

Tickets to the event are $40 per person or $300 for a table of eight. Tickets include a spot in the trivia game, finger foods, and soft drinks. A cash bar will be available, along with a silent auction for donated goods and desserts. 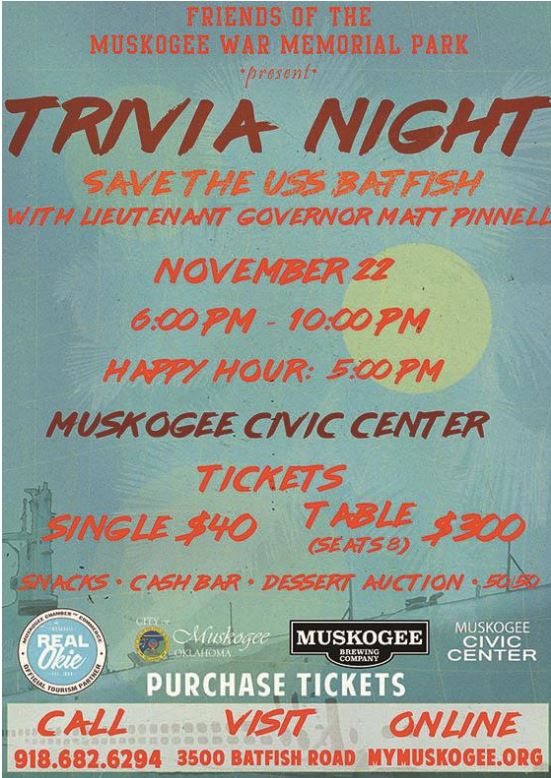