MIDWEST CITY, Okla. (KFOR) – Midwest City police have identified the victim of a shooting at an auto parts store on December 20 as the investigation continues.

Officers were called to the Auto Zone on NE 23rd St. in Midwest City around 2:30 p.m. Friday.

According to authorities, two people were arguing in the parking lot when the suspect shot 43-year-old Tyrone Jones.

Jones was transported to a hospital where he died from his injuries. 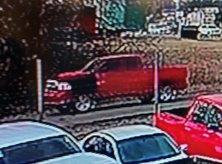 The suspect fired shots, took off on foot and then got into a truck and fled.

The suspect vehicle is described as a red Dodge pickup 4-door quad cab with tinted windows.

The driver-side front fender is black.

If you have any information on this case or can identify the suspect, call Midwest City Police immediately.