Update: Officials have arrested the man involved in a chase with police Monday afternoon that ended at NE 23rd and MLK.

OKLAHOMA CITY (KFOR) – The Oklahoma City Police Department has shut down traffic at NE 23rd and MLK while they work to take a suspect into custody after they led officers on a chase but never exited the vehicle.

The chase started after officers attempted a traffic stop on the vehicle. 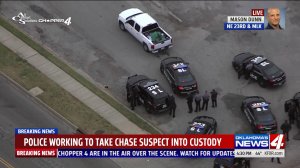 The suspect has told the officers that he is a sovereign citizen and does not have to produce his driver’s license or roll down his windows.

The windows on the truck seem to be very tinted so police are working to determine what the suspect is doing inside.

According to scanner traffic, they have called for a bean bag gun to the scene.

No other information is available at this time.