Police say 28-year-old Alexander Tilghman opened fire on people inside the Louie’s restaurant near Lake Hefner around 6:30 p.m. on Thursday.

Capt. Bo Mathews, with the Oklahoma City Police Department, said 28-year-old Alexander Tilghman walked up to the front doors of Louie’s On The Lake and began firing a handgun at patrons inside the restaurant.

“From all of the evidence at this point, it doesn’t look like he knew anybody at the restaurant, didn’t work at the restaurant and he was actually shooting from the outside of the door into the restaurant, so it looks like, to me, that it would be a random event. This is an ongoing investigation, that could change,” Mathews said.

In all, officials say three people were shot.

Family members tell News 4 that Natalie Will, and her daughter, 12-year-old Syniah Giles, were shot as they were walking inside the restaurant. Family members say Will was grazed by a bullet and did not require surgery. Syniah was shot near the tailbone area and she spent a couple of hours undergoing surgery.

Speegle will have surgery Friday according to her aunt, Leah Geurin. She says she has a shattered collarbone from a bullet and another one when into her right arm. Geurin says she will need metal plats and there is nerve damage to her right-hand which surgeons are hoping can be fixed so she regains use of it.

And, a man suffered a broken bone in the chaos after the shooting began. Fortunately, all of the victims are expected to make a full recovery.

Tilghman was wearing earmuffs and some type of shooting glasses at the time of the shooting. The Associated Press reports that officials with the Oklahoma Council on Law Enforcement Education and Training confirmed that Tilghman held an active license as an armed guard.

Police say the last time they had contact with Tilghman was in 2003 when he was arrested for assault and battery.

At this point, detectives are looking into Tilghman’s history, but say they do not know of a history of mental illness.

"Because someone might have a mental illness doesn't mean they go to jail. That's one thing we train a lot at the police department. Was he endangering someone else's life, was he endangering his own life?" Capt. Mathews said. 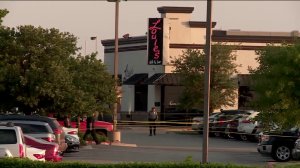 While his mental state is still being investigating, videos from YouTube paint a concerning picture of the suspect.

"Been going through a hard-demonic attack recently and stuff. I haven't heard from any real people yet or whatever, so I got frustrated and, you know, I was just fed up and I just ******* deleted my whole entire ******* channel. All of my videos are ******* gone," Tilghman said in one video.

Neighbors of Tilghman say he lived with his father and seemed very “reclusive,” and not many people came or went from the home.

"We walk this street a lot with our dog and we have never, ever seen anyone come in or out of this house at all. That car, to my knowledge, has never moved since I’ve lived here," John McClure, a neighbor, told News 4.

McClure says he just realized that Tilghman was the one allegedly behind the attack on Friday morning.

He said that although it is a tragedy, it could have been much worse.

"I am very grateful that whoever took care of this last night did what they did. I think that's incredible."

Celebrate the 4th of July safely with these tips