In an earlier statement, NYPD said officers tackled and detained Blake believing he was a suspect involved in an ongoing investigation regarding fraudulently purchased cell phones, according to WPIX.

According to New York Daily News, 38-year-old officer James Frascatore of Long Island was the officer who is seen on the video body-slamming the tennis player outside the Grand Hyatt on 42nd Street. 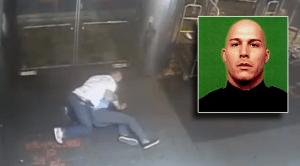 Frascatore is reportedly a defendant in four ongoing civil cases that claim he and several other officers used excessive force during false arrests. He has also had five complaints against him with the Civilian Complaint Review Board.

The NYPD’s Internal Affairs Bureau interviewed James Blake last night. The NYPD is releasing video footage from the September 9th incident outside of the Grand Hyatt Hotel in Manhattan. A copy of the video was provided to Blake’s attorney. The investigation is still ongoing.