OKLAHOMA CITY - There is no debate over one thing in the city's Plaza District- pretty much everyone seems to like snow cones.

Nor does it seem to be a problem that a new non-profit wants to sell the frozen treats at 16th and Blackwelder, one of the more rundown corners of the blossoming district.

"The issue is architecture, honestly," said Tony Morton, who owns Kasum Contemporary Fine Art, just steps from the planned site. "I don't think anyone down here is opposed to snow cones, kids or charities."

Stuck somewhat in the middle is Sasquatch Shaved Ice, the brainchild of Whitley O'Connor, who also runs the Curbside Chronicle, a newspaper serving the homeless community.

The Urban Design Committee has already given Sasquatch the go-ahead. It's scheduled to open in July, employing low-income children from the Classen Ten Penn area.

O'Connor plans to match every dollar his employees save, so they can put money toward education, transportation or other "life-enriching opportunities."

"The idea is that we give them job training, encourage them to graduate high school and pursue further educational opportunities, and get a leg up financially to break the cycle of poverty," O'Connor said. "All of the money will go into bettering our kids' lives." 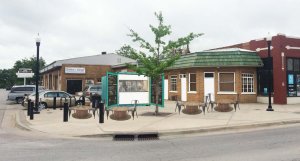 But instead of moving into a storefront, O'Connor is setting up shop in a modified storage unit on the street. It's a similar idea to other OKC businesses like Perch'd and Anchor Down.

"It will be fun and vibrant, kind of like some of the other shipping container projects in Oklahoma City," O'Connor said. "We're just really excited to get open and get started and be part of the next phase of the Plaza and see its continued growth."

Sasquatch has support from a number of businesses and community members, but there are also several opposed to the project because they don't like the look of the renderings.

"I feel like everyone down here is for the concept of this," said Tony Morton. "The concern, the real concern and the topic of conversation we should be having is about architecture and about design."

While Morton isn't sure there would be a problem with one storage unit facility, he fears what will happen if other businesses follow suit. The Plaza's hard-earned image, he said, would likely suffer.

"It could slow the momentum [ in the growing community,]" he said. "They haven't asked that anything be improved on this building [it will sit in front of], but they've allowed to pass an addition to the building, which is kind of questionable."

Morton has filed an appeal with the Zoning and Planning Office. He expects his case to come up next month.

Meanwhile, Whitley O'Connor is focused on the positives of his new venture. Artists are busy getting the storage container ready for the grand opening.

"We're excited to be part of this atmosphere," he said. "I think everyone's going to love it."