NORMAN, Okla. – Norman students who were injured in a terrifying bus crash in Texas are still recovering.

On September 29, Cleveland Elementary students were traveling to Texas for their annual field trip to SeaWorld.

However, the fun trip took a horrifying turn when one of the two buses carrying students was in a rollover accident near Lampasas, Texas.

The bus that rolled was carrying 27 female students. Law enforcement officials say it was raining and the bus had hydroplaned, rolling the bus several times. Students were left with minor and non-life threatening injuries. 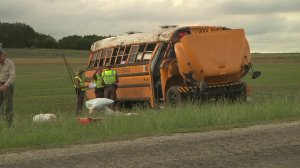 One of the fifth graders on the bus told News 4 she thought it was a dream, and tried to help another girl who was injured.

“One of the girls from the bus, she was under two girls, so she starts reaching out to me. She said, ‘Piper, help’ and I tried to and I grabbed her hand with this arm and it hurt really, really badly and I said, ‘I can’t help, I’m sorry,'” said Piper Draper.

Draper’s shoulder was broken during the incident, and she also has a torn ligament in her leg and several cuts and bruises.

“I just wanted someone to hold me and hug me,” she said.

The district sent a statement saying in part:

“We are incredibly grateful for the emergency responders and medical staff who quickly served our students and teachers. We will also forever appreciate the Lampasas Independent School District and Superintendent for opening their doors to provide respite care for our school family, as well as the Lampasas community members who were quick to provide food, pillows, blankets and stuffed animals to comfort our students. We also want to express our gratitude to Soldier Xpress for immediately offering their transportation services.

We continue to closely monitor those members of our school family who remain in the care of medical professionals and know you will join us in expressing compassion for everyone involved. Thank you again to everyone who has offered support during this difficult time.”

There will be additional counselors at the school on Monday to provide emotional support for students and staff who may need assistance.