Skip to content
Follow the Storms
Follow the Storms
KFOR Interactive Radar
Live Now
Live Now
KAUT Rise and Shine
This is an archived article and the information in the article may be outdated. Please look at the time stamp on the story to see when it was last updated.
NORMAN, Okla. – An Oklahoma woman accused in a string of vandalism cases featuring racist graffiti is facing five charges. The investigation began late last month after the Oklahoma Democratic headquarters and the Chickasaw Nation buildings were vandalized with racist graffiti in Oklahoma City. The concrete was spray painted with neo-Nazi messages including ‘Gas the Jews’, ‘Welcome to Germany’ and racial slurs directed at different ethnicities. Last week, officials in Norman discovered that McKinley Elementary School, the Firehouse Arts Center and the Cleveland County Democratic Headquarters were all covered in racial slurs and hate-filled messages. Later News 4 learned that another school, Alcott Middle School,  was targeted. A note was left at the school which according to the police report appeared to be racially motivated but no property was damaged. A short time later, authorities announced that they had arrested Allison Christine Johnson in connection to the vandalism cases. 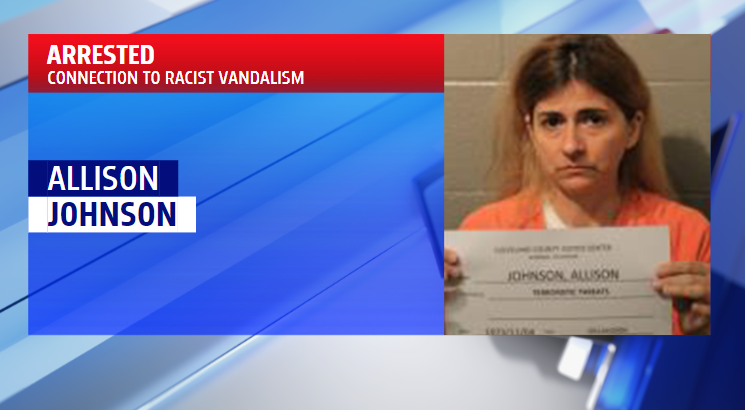 Court documents obtained by News 4 show that Johnson has been charged with four counts of malicious injury to property and one count of malicious intimidation or harassment in Cleveland County. According to a probable cause affidavit, authorities say that Johnson turned herself in and admitted to committing the crimes. The affidavit states that Norman police had been dealing with several incidents of graffiti over the last four weeks. In fact, it states that graffiti was found at two churches, two public schools, two homes, the Firehouse Art Center and the Cleveland County Democratic Headquarters. The documents state that the words “rape white girls” and “hang n***** boys” were spray-painted on walkways leading to an elementary school. “Allison said that her intention was to scare Jewish people, and people of different races, other than white. Allison spoke at length about her racist beliefs and her efforts [to] ‘wake people up,'”the report states. Johnson is scheduled to make her first court appearance in Cleveland County on Monday afternoon. At this point, charges have not been filed in Oklahoma County.
35.222567-97.439478

Texas homicide suspect believed to be in Enid

‘It’s the right thing to do.’ Metro Jewish community center, OKC mayor give away 16,000 masks

United warns 36,000 employees they may be furloughed this fall

Supreme Court: Employers can opt out of birth control coverage