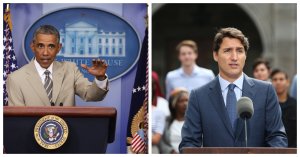 “I was proud to work with Justin Trudeau as President,” Obama tweeted. “He’s a hard-working, effective leader who takes on big issues like climate change.”

He continued, “The world needs his progressive leadership now, and I hope our neighbors to the north support him for another term.”

Obama’s support continues the pair’s friendship from when the former US president sat in the Oval Office. It comes as Trudeau runs a competitive race against Conservative leader Andrew Scheer and in the aftermath of Trudeau’s recent blackface controversy.

Last month, Time magazine surfaced photos of Trudeau wearing brownface when he was a schoolteacher in 2001. In his apology, Trudeau admitted he had put on dark makeup when he was in high school as part of a talent show in which he sang the traditional Jamaican folk song “Day-O.”

CNN partner CTV News later obtained that second photo from a source, who said it is a picture of Trudeau in a yearbook at Brebeuf College. A video shows a third instance of Trudeau wearing dark makeup, this time in the early 1990s.

Trudeau apologized for wearing blackface after Time posted the first photo, and again after all three had surfaced. He also said he did not know how many times he had put on racist makeup, adding that “the fact is I didn’t understand how hurtful this is to people who live with discrimination every day.”

On Wednesday, the Prime Minister thanked Obama for the support, tweeting: “Thanks my friend, we’re working hard to keep our progress going.”

This isn’t the first time that Obama has endorsed a foreign leader since departing the White House. In a 2017 video, Obama endorsed French President Emmanuel Macron, the centrist politician widely backed by the establishment in his run against far-right leader Marine Le Pen.