MURRAY CO., Okla. – Oklahoma Department of Corrections officials are searching for a man who has failed to report to his probation and Parole Officer since April.

Joshua A. Haase, 37, was paroled in January on a 15-year Murray County sentence for drug trafficking.

His criminal record stretches back to 1999 and includes a Stephens County conviction for assault and battery with a dangerous weapon.

Haase is described as white, 6-feet tall, weighing about 240 pounds, with black hair and green eyes. 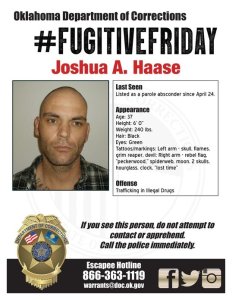 He has numerous tattoos, including lightning bolts on his back and the word “outlaw,” as well as a skull, flames and grim reaper on his left arm, and a rebel flag, spider web, moon, skulls, and a clock on his right arm.

Anyone with information can call the escapee hotline at 866-363-1119 or email warrants@doc.ok.gov.

All calls and emails are confidential.

States rush to catch up on delayed vaccines, expand access