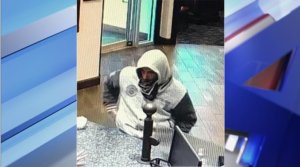 Dwayne Rasmussen, 55, is awaiting sentencing after being convicted by a federal jury Thursday, Jan. 23 for three bank robberies that occurred in the Oklahoma City metro area and Chickasha, according to a Department of Justice news release issued by the U.S. Attorney’s Office for the Western District of Oklahoma.

“Mark Drew Wilson, Rasmussen’s accomplice for the robberies, testified to driving the getaway vehicle and the preparation for each robbery. Evidence further showed that in each of the robberies, Rasmussen wore gloves and disguised his appearance to avoid apprehension,” the news release states.

Bank surveillance video evidence and identification by bank employees also tied Rasmussen to each robbery, according to the news release.

Rasmussen used the same terminology during the robberies, demanding “100s and 50s,” and saying, “That’s not enough. Give me all your money.”

As Rasmussen robbed the bank in Chickasha, he brandished what appeared to be a pistol with a green grip and stole “virtually all the money” from the three tellers’ drawers, for a total theft of $10,474, according to a Justice Department news release issued on Dec. 4, 2019.

Nine bank employees and a bank customer testified during the trial about Rasmussen’s use or intimation of a dangerous weapon as he robbed the banks.

“The trial lasted six days, and the jury deliberated approximately nine hours before finding Rasmussen guilty of three counts of bank robbery. He was acquitted on one additional bank-robbery count,” the news release states.

The additional count he was acquitted on is for an alleged robbery at RCB Bank, 800 Garth Brooks Blvd., in Yukon on April 5, 2019.

Rasmussen faces a maximum potential penalty of 20 years in prison for each bank robbery, three years of supervised release, a fine of $250,000 and mandatory restitution.

“If, however, the court determines his criminal history includes two or more serious violent felonies, he could be subject to mandatory life in prison,” the news release states.

Wilson pleaded guilty in November to conspiracy to commit bank robbery. He is currently awaiting sentencing, and faces up to five years in prison, three years of supervised release, a fine of $250,000 and restitution to four banks.

JERUSALEM (AP) — An Israeli hospital on Monday said preliminary research indicates a fourth dose of the coronavirus vaccine provides only limited defense against the omicron variant that is raging around the world.

ALBANY, N.Y. (WTRN) - Intuit, the company that owns Turbo Tax, said that it would no longer be participating in the IRS's Free File program in July. For years the company offered free e-file services and was featured on the IRS website.

Turbo Tax does have a free file option on its website, even though they are not participating in the IRS's program. There are limitations on who can use their free service and people who have used Turbo Tax's free file service in the past may find themselves unable to this year.

OKLAHOMA CITY (KFOR) - Officials at a local school district announced that two schools would be remaining in distance learning.

Putnam City Public Schools announced that at least two of our schools will remain in distance learning on Tuesday, Jan. 18.

Out of this world! 555.55-carat black diamond lands in Dubai

Within the ashes full of memories, a wedding ring is found

Former NFL player dies while being held in Kansas prison

Should lawmakers be banned from trading stocks?

'Until all is well, it's not the end': Martin Luther King's family spotlights voting rights on MLK Day

“I had to get out of the way,” Off-duty officer talks about chaotic shooting at Walmart