OKLAHOMA CITY (KFOR) – Keith Sweeney, Oklahoma City Police Sergeant found guilty of second-degree murder after shooting and killing an unarmed suicidal man in 2017, has been sentenced to 10 years in prison. 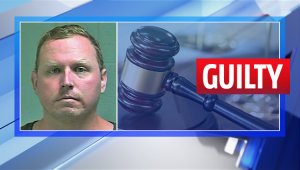 Defense attorney Gary James says Sweeney reacted the way he was supposed to react and that police officers don’t have time to evaluate things with 20/20 hindsight when things move so quickly.

He argues Sweeney wouldn’t have fired if he knew what Pigeon was holding wasn’t a knife and acted reasonably based on his perception.

The jury recommended a 10-year sentence at the time of his conviction.

“No one is happy here. Dustin Pigeon doesn’t come back and Sweeney is off to prison. But the right thing happened,” District Attorney David Prater said following the verdict.

DEL RIO, Texas -- The Department of Homeland Security suspended the use of horse patrols in Del Rio, CNN and other news outlets reported Thursday.

US lawmakers and experts worry about kids and COVID-19