OKLAHOMA CITY (KFOR) – A philanthropist was honored in Oklahoma City, Thursday, for his contributions toward helping those who suffer from movement disorders. 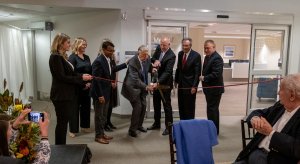 The facility received its new name during a blessing and dedication ceremony on Thursday.

Meinders has donated a combined $3.23 million to Mercy since 2018. Those donations have went toward providing critical services to patients with movement disorders, which include Parkinson’s Disease, Huntington’s Disease, essential tremor and dystonia.

“This is philanthropy at its finest,” said Lori Cummins, vice president of development for Mercy Health Foundation. “There was a need and it has been completely provided for by a donor. Herman’s heroic generosity will make a tremendous difference in the lives of patients for years to come.”

Meinders first donation of $1.67 million to Mercy Health Foundation in 2018 enabled Mercy to open the Meinders Center for Movement Disorders and hire Cherian Abraham Karunapuzha, its first physician who specializes in the treatment of movement disorders.

Meinders made a $1.56 million donation to Mercy Health Foundation in 2019 to add more services to the center.

Meinders and his wife LaDonna long supported Parkinson’s research and treatment before he was diagnosed with Parkinson’s Disease in 2014.

Meinders founded American Floral Services Inc., an Oklahoma City-based international flowers-by-wire service, in 1970. The company grew to become one of the largest floral wire services in the world. Meinders sold AFS in 1994, and it merged with Teleflora in 2000. He remains chairman emeritus of Teleflora.