OKLAHOMA CITY (KFOR) – Oklahoma City police are asking for help in identifying an armed man who robbed a convenience store while wearing a mask and hood.

A surveillance video posted to YouTube shows the armed man hopping over the counter and robbing the store as the store clerk sits behind the counter.

The suspect is holding a handgun, wearing a black hooded sweatshirt that says “BRICKTOWN,” blue jeans and an animal-type mask with what appears to be yellow-and-orange tipped floppy ears. 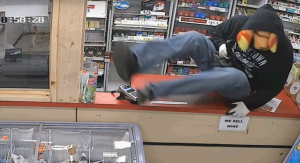 “Although he went to great lengths to conceal his identity, we’re hopeful someone might recognize something about him and contact Crime Stoppers,” police said.

“Tipsters can remain anonymous, and may be eligible for a cash reward,” police said.