OKLAHOMA CITY - As part of the Oklahoma City Public School District's plan to improve the district, re-align its student population and increase educational opportunities for all students, district officials released three options it intends to move forward with, under which 15 or 18 schools could be closed.

Superintendent Sean McDaniel presented the three options, or paths, of the district's "Pathway to Greatness" project at a school board meeting at Northeast Academy Tuesday evening. With more than 400 people filling the auditorium, many concerned their school could be on the closure list, McDaniel first addressed what students, parents and families would get in return from all three path options: redirecting money and resources to better serve students. 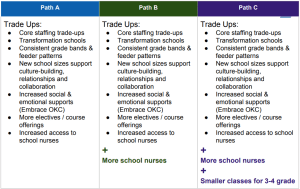 No matter the path ultimately chosen by the school board, McDaniel said all paths would offer trade-ups for students, families, teachers and staff. However, school closures, consolidations, grade restructuring and building re-purposing are inevitable for the start of next school year.

Under the first two paths, A and B, 15 schools would close and buildings would be re-purposed for such uses as community centers, early childhood centers, or for use by the Oklahoma City-County Health Department. "Path C" calls for 18 schools to be closed a re-purposed. Under all three plans, other schools would re-open, serving new grade levels, depending on the option chosen. Attendance zones, and feeder patterns would also change under the plans.

McDaniel said no matter the path chosen, every elementary school would offer full-time art, music and PE classes, every day (currently only 18 of 54 schools provide art, music and PE). Elementary schools would also receive at least one full-time counselor, compared the quarter of schools that do currently. McDaniel said the three paths would also lower the average K-6 class size, and increase support staff for teachers.

After McDaniel finished the presentation, some who left the auditorium expressed a feeling of being overwhelmed by the options presented, yet open to the options.

"I think they said quite a bit. At the same time, I think we need to get more details about what (McDaniel) is actually saying. I'm all for that. I'm all for it. But at the same time, we just want clarity on what — exactly — our future looks like," said Carla Burton, an alumna and current staff member at Star Spencer High School.

"Everything sounds hopeful," Burton said, adding she plans to attend the community meeting at U.S. Grant High School Wednesday. "The full plan looks promising to me. Like I said, we’re standing by, just waiting to see what else is in the works."

The options will be be presented and open for discussion at meetings in the coming days. Community meetings will be held at 6:00 p.m. at U.S. Grant High School Wednesday (English) and Thursday (Spanish). Meetings next week are scheduled for 6 p.m. Monday at Star Spencer High School, Tuesday at Douglass High School, and Wednesday at NW Classen High School.

"I feel like that was a lot of information to gather, but it gives us an idea of where we can be," said Teleace White, who has children that attend Northeast Academy High School and FD Moon Elementary. White said she was relieved to find out her son's school, FD Moon, wasn't closing. But said she's cautiously optimistic about the plans.

"We're trying. So as we grow, we hope that (McDaniel's) models will maybe allow (the district) to grow further," White said.

"It's nice to see all three paths. It's sad that there’s going to be at least 15 schools affected by the paths. But just knowing that there's a plan is relieving," said parent Tia Cookson, also an FD Moon parent. "I think it's imperative for the schools staying open to have plans to receive the students affected by the closures, and as a community, just to make sure we're welcoming those babies and their families."

Both White, Cookson, and other parents in attendance voiced similar concerns, that there must be the support for not just students and families, but teachers and staff, no matter the transition path chosen by the school board. A suggestion will be presented by late February with the school board scheduled to approve an option by early March. The chosen plan will then be implemented for the start of the 2019-2020 school year.

"It's the biggest district in the state. And yet, it's not the best, and it should be the best," Cookson said. "As long as we get what we're told we're going to get, yes. It's a good concept. The question is it going to be a reality?"