OKLAHOMA CITY – An Oklahoma attorney is facing possible charges after authorities said he tried to smuggle contraband into a county jail for an inmate.

Lon Jackson Darley, III, 67, was booked on complaints of bringing or possessing contraband in a jail and conspiracy after authorities said he tried to smuggle cigarettes in clear plastic bags to his client.

“Whenever anyone brings contraband into a penal institution, I mean that’s against the law,” said Mark Myers with the Oklahoma County Sheriff’s Office.

News 4 spoke with Darley on Thursday. He claims the entire situation was a misunderstanding. 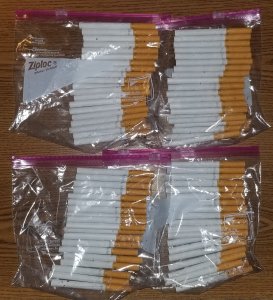 According to Darley, he was trying to bring court documents, glasses and pictures to his client. He said the cigarettes were meant for another client of his and the envelopes were mislabeled.

“She’s (other client) in treatment for opiate dependency, and she could smoke there so I was going to send her cigarettes because she doesn’t have any money,” he said. “Where the mistake came in is I put the envelope label on the wrong envelope, and I took that with me. It was material that I intended to mail.”

The Oklahoma County Sheriff’s Office is telling us a different story.

According to Myers, text messages were coming through Darley’s phone when he was being interviewed at the jail. Court documents said the text messages read “IS HEBER” and “HEY LON THIS HEBER MY FRIEND WANTS 4 MORE PAKS ASAP PLEASE.”

Darley said “Heber” is the name of his client but when we showed him the number listed on the search warrant, he claims it did not belong to his client or his client’s wife.

Myers said they were able to find the inmate with a cellphone.

“Those are all things, aspects of this investigation that they are currently on but, obviously, if you look at the message on the phone… if it matches the message that was sent to the attorney, that’s pretty good evidence,” he said.

Whether Darley will be formally charged will be up to the D.A.’s office.

(NEXSTAR) – Jamie Foxx is mourning the loss of his younger sister, DeOndra Dixon, who has died at 36.

"My heart is shattered into a million pieces... my beautiful loving sister Deondra has transitioned," Foxx wrote on Instagram. "I say transitioned because she will always be alive... anyone who knew my sis... knew that she was a bright light."

Trump's choice to fill the vacancy of the late liberal icon Ruth Bader Ginsburg potentially opens a new era of rulings on abortion, the Affordable Care Act and even his own election. Democrats were unable to stop the outcome, Trump's third justice on the court, as Republicans race to reshape the judiciary.

OKLAHOMA (KFOR) — This time of year, lots of folks are focused on the World Series.

KFOR decided to open the Oklahoma history books and look at a connection between baseball and our state's Native American community. There is a deep connection.

Susan B. Anthony’s grave has new plastic shield for protection from ‘I voted’ stickers

‘We are blowing up the precedent’: Dems argue against vote to confirm Trump’s Supreme Court nominee