An Oklahoma church group went on a mission trip to Africa.

It was a trip and mission of a lifetime but it turned into a travel nightmare.

They were trying to get home but ended up stranded, after two of their flights were canceled.

Now, they’re waiting to hear from the airline about when they’ll finally return home.

Abernathy’s frustrated as he and 9 other Oklahomans are stuck in Ghana.

They’re out of West Metro Community Church in Yukon and on a mission trip working with orphans, churches, and schools in the area.

But, the arrangements to get back home have been a headache.

“We`re met by a Delta representative who told us our flight was canceled and would not allow us off of our trolly to go In and talk to anybody at the desk,” said Abernathy. “They told us they had a hotel and our flight would leave the next night.’

He says that flight was also canceled.

But, Abernathy claims others who were also at their hotel, got put on other flights by Delta.

“It`s been a nightmare,” said Abernathy. “An absolute nightmare. Once again, no communication from Delta. They haven`t communicated to the hotel. If we didn`t have the app, we wouldn`t know what`s going on. ”

Another concern, Abernathy says some in their group are missing work and not getting paid.

“When you are an American carrier and you know that you`re stranding Americans in a foreign country, you have a duty to them to be in better communication than Delta has been,” said Abernathy.

Although the traveling issues have been a nightmare, he promises they’ll be back to Ghana.

“Many on my team are already planning on coming back, so this isn`t going to deter us from coming back, we`ll probably just fly a different carrier,” said Abernathy.

Delta Airlines issues a statement saying,
“Delta apologizes to our customers for the inconvenience and is working diligently to get them home as quickly as possible. Delta has reached out to the customers directly to work with them to assist with anything they may need while in Accra.”

The airline also said it will refund all travel and additional expenses.

UPDATE (3/25/19) : On Monday the group was able to board a flight for Oklahoma and should be home sometime Tuesday. 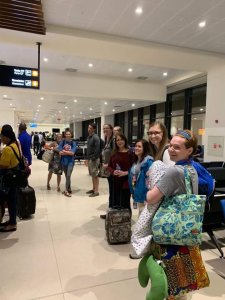 Troopers with the Oklahoma Highway Patrol attempted to pull over a vehicle in a construction zone near S.W 15th and I-44.

One suspect on the run after police chase in Oklahoma County