OKLAHOMA CITY - An Oklahoma City councilman turned himself into authorities after being charged with embezzlement last week.

Prosecutors allege Pettis stole tens of thousands of dollars from charitable organizations under his control, and used the funds for personal use.

Pettis, 35, faces three counts of felony embezzlement and one count of intentionally failing to file tax returns for nine years.

Prosecutors allege he stole more than $175,000 through supposed charitable organizations started or controlled by Pettis.

Pettis has served as a Ward 7 councilman since 2013 and is currently running for District 1 County Commissioner. 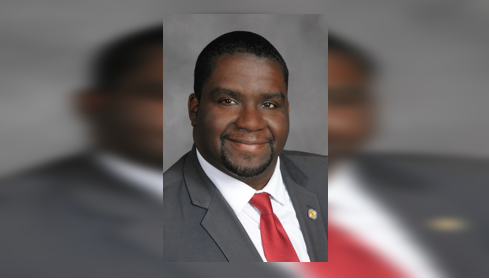 In April 2017, an individual called the Oklahoma City Police Department alleging criminal activity by Pettis, which launched a year-long investigation.

According to the affidavit, Pettis controlled three charities from which he took money for personal use, or could not show the funds were directed to the charity’s intended mission.

Court documents show $12,551.17 was deposited between January 1, 2013 and June 30, 2017 into a donation-funded account for the Rhonda K. Hutson Foundation (RKHF), which is to raise funds and awareness for triple negative breast cancer, according to the affidavit. Memos on the majority of checks deposited contain identifiers as: donation, fundraiser, tickets, car raffle or school supply drive.

However, during that period, investigators wrote there was $11,572 in outgoing funds, the majority being cash withdrawals by Pettis. There were also expenses that include t-shirts, Off the Hook Seafood, Sam's Club, Bill Veazey's Party Store, and Walmart.

The affidavit states "the investigation was not able to verify RKHF performing any activity to further their stated objective."

Another charity, called The Southern Leadership Enhancement Center (SLEC), was purportedly established "to assist the impoverished community who lack the skills necessary to gain employment and participate in society," according to a grant request letter sent by Pettis to a potential donor.

However, according to the affidavit, records show Pettis made cash withdrawals from the charity, but no checks were written.

There is also no evidence of any charitable activities conducted by the SLEC.

News 4 reached Santreece Foundation President Thomas Reece by phone at his Chicago home Friday evening. When asked about the investigation, Reece said he's "not going to talk about it. Not going to discuss the matter at all, period."

A bank account for a third organization, called the Oklahoma Institute for Minority Affairs (OIMA), was started in 2013.

Part of the OIMA stated mission reads, "being dedicated to the social, economic, and civil development of African-American, Native-American, Latino-Hispanic American Communities as well as Women's groups and Organizations in Oklahoma."

The affidavit states, "the investigation was not able to verify OIMA performing any activities for the benefit of the community."

Pettis is also charged with tax fraud, accused of failing to file taxes between 2009 and 2017. In fact, the affidavit states, "the OTC has no record that John Pettis Jr. has ever filed an Oklahoma Tax Return."

When questioned by investigators, neither Pettis nor his attorney offered “any explanation,” according to the court records, and Pettis still has not provided any documentation of activities of the charitable organizations related to their purported missions.

He turned himself in to authorities Tuesday and was booked into jail on three counts of embezzlement and one count of failure to file tax returns.

Defense attorney Mark Henricksen said Monday that Pettis will plead not guilty to the charges.

[VIDEO] Taking no questions from the press, Councilman John Pettis leaves the Oklahoma County jail. He’s accused of taking at least $165,000 from charities under his control @kfor pic.twitter.com/5HjVA3TG4J