Skip to content
This is an archived article and the information in the article may be outdated. Please look at the time stamp on the story to see when it was last updated.
OKLAHOMA CITY – Authorities say three men who are connected to several carjackings have been taken into custody after a chase and manhunt last Thursday. Investigators with the Oklahoma City Police Department say 32-year-old Antonio Hill, 22-year-old Matthew Lacopo and 21-year-old Jacob Owens were arrested after leading officers on a short chase. 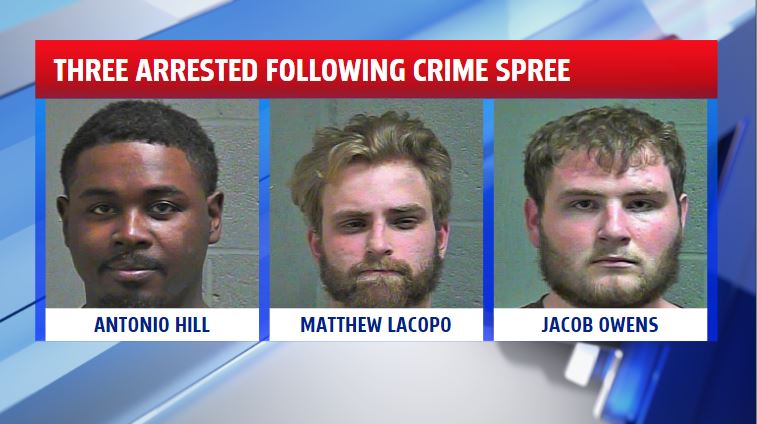 Officials say their crime spree began on Tuesday when the group allegedly carjacked a woman at a grocery store in southwest Oklahoma. Two days later, police say they used that stolen vehicle to carjack another person at an apartment complex near N.W. 36th and Ann Arbor. Just 30 minutes later, they allegedly carjacked another woman outside of a business in the 7200 block of N. May Ave. Investigators say they waited about an hour before they allegedly robbed a man outside of a restaurant near N.W. 50th and May Ave. While patrolling the area on Thursday night, an alert officer noticed one of the stolen vehicles and attempted to pull it over. “What happened during the course of the day, we had three armed robberies, individuals, and a possible business,” said Oklahoma City Police Capt. Bill Wells. “What we did was descriptions went out and our officers located the car down around 39th and Portland. When [the officer] turned around and tried to get the vehicle to stop, the car accelerated away from him. He started a pursuit, but when the car went the wrong direction against the traffic he terminated [the chase.] But we had enough units up in this area that was able to spot the car and chase it to this area, bring it to this location.” Now, we’re getting an inside look at the police take down of all three suspects after Oklahoma City police released body cam footage of the arrests. “Hey, show me your hands! Show me your hands now!” an officer with the Oklahoma City Police Department shouted at Antonio Hill after he led police on a chase into one of Integris Baptist Hospital’s parking garages. Guns drawn, one officer on the chase shouted, “Get on the ground! Get on the ground now!” Another officer gave a warning to Hill just as he was tackled and on the ground. “You’re about to get shot if you don’t comply!” he said. As Antonio Hill was getting cuffed and loaded into a squad car, police found 22-year-old Matthew Lacopo, another suspect in the carjackings and chase. He gave into officers without incident. “Turn around. Stop!” that officer shouted as he found Lacopo hiding in some bushes. “Air One, hold the air. I’ve got one at gunpoint!” the officer shouted. “On your knees! Put your hands on your head. Don’t move.” Police quickly got Lacopo in a squad car and off to jail. The third arrest struck many people as a little strange. Jacob Owens, 21, was on the run for about an hour, but in the end, he simply went home. Cops found him just as he was getting out of his car. It looked like he may have been injured before police found him, but he cooperated throughout his arrest. “Hey, I’m gonna make sure you don’t have any weapons on you,” the responding officer said. “I have a knife in my pocket,” Owens said as he lifted his hands in the air. The officer confiscated the knife and Owens was arrested without incident. All three suspects now face three counts of robbery and use of an unauthorized vehicle. Hill also faces charges for running from police and having a firearm after a felony conviction.
35.46756-97.516428