OKLAHOMA CITY – An Oklahoma City school bus driver was given a ticket after an accident on Wednesday morning.

A school bus was heading south on Lindsay, near S.E. 50th St., when the driver failed to stop.

A car, which was driving westbound, hit the bus.

Authorities say seven children were on the bus at the time of the accident. 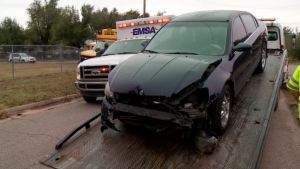 Fortunately, no one on the bus was injured in the crash.

All the children were moved to a different bus and taken to school.

The driver of the car, who is pregnant, was checked by EMSA at the scene.

Police say the bus driver was cited for failure to stop.