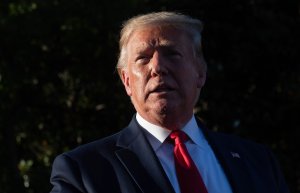 U.S. Representative Kendra Horn (D) issued a news release Tuesday in which Horn stated her support of the report’s release.

“It is my job as a member of Congress to ensure our democracy stays strong. That means pursuing the truth and protecting ourselves from foreign adversaries. Our national security should never be partisan,” Horn said. “It is time we find a bipartisan path to bring people together and get to the truth in an honest and methodical manner. To do that, we need all of the facts. This should be a detailed and responsible investigation and not one conducted in a media circus. Americans are tired of finger pointing. We should do the job we were sent here to do.”

A yet to be identified U.S. intelligence official reported that during a July 25 phone call, Trump pressured Ukrainian president Volodymyr Zelensky to investigate the business dealings of Hunter Biden, the son of the former vice president who is now running for the Democratic presidential nomination. Trump is alleged to have offered reactivation of U.S. aid to the Ukraine in exchange for the investigation.

“I believe the testimony from the Director of National Intelligence on Thursday is essential to help us learn what happened and when,” Horn said. “The rule of law also requires the administration to release the whistleblower report. Our nation has laws to protect whistleblowers and to protect the security of our elections, both of which are fundamental to our democracy.”

BEIJING (AP) — In a rare admission of the weakness of Chinese coronavirus vaccines, the country's top disease control official says their effectiveness is low and the government is considering mixing them to get a boost.

Chinese vaccines “don’t have very high protection rates,” said the director of the China Centers for Disease Control, Gao Fu, at a conference Saturday in the southwestern city of Chengdu.

OKLAHOMA CITY (KFOR) - A woman was transported to a hospital in critical condition Saturday after a shooting in a mall parking garage.

Oklahoma City Police say they were called to the scene near Northwest Expressway and North Pennsylvania Avenue at approximately 8:47 p.m. on reports of a shooting on the top floor of the Penn Square Mall parking garage.

KANE COUNTY, Utah (KTVX) - The west has seen a rash of wildfires in recent years. Some caused by nature, others caused by humans. But geologists say one fire likely started by spontaneous combustion in Utah has been burning for decades and is showing no signs of dying out. If that's not intriguing enough, the blaze is burning underground.

Woman dead, man in serious condition after shooting in Oklahoma City; suspect on the loose