SULPHUR, Okla. (KFOR) – Boomer, a K9 officer in the Chickasaw National Recreation Area, is retiring after a long, faithful career of sniffing out illegal narcotics. 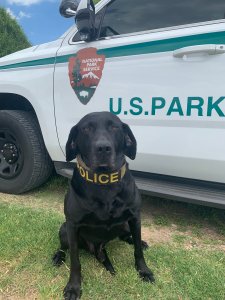 Boomer spent 56 dog years – which amounts to nine human years – on the job, according to Chickasaw National Recreation Area officials.

Boomer started his park service in 2001 after completing narcotics and detection training.

“He has been instrumental in helping detect illegal drugs in his home park, the local community, and on special assignment to other National Park Service units,” the Chickasaw National Recreation Area states.

In the course of his career, Boom amassed certifications from the State of Oklahoma, the National Narcotic Detector Dog Association and the American Police Canine Association, as well as other associations and agencies.

He enjoyed performing demonstrations for local schools and community groups, as well as working with colleagues from surrounding law enforcement agencies, according to his handlers.

Boomer will pass his job on to K9 officer Rex before starting his well-earned retirement.

“He will remain in the Sulphur area, where he plans to spend more time with his family, receive as many belly rubs as he can guilt them into providing, chase squirrels and continue to be a very good boy,” said Chickasaw National Recreation Area officials.