Investigators were originally called to investigate a public intoxicated person at the Canadian County office of the Oklahoma Department of Human Services.

When sheriff’s deputies arrived Monday, they identified 33-year-old Glenn Baldwin as the suspect in the public intoxicated call.

Baldwin told patrol deputies he was at DHS to report a computer crime incident.

During the investigation, “investigators interviewed Baldwin, father of the child, regarding the computer crime incident.”

Investigators asked Baldwin if they could do a forensic examination of his cellular phone to see if his device was used for in connection with the computer crime. Officials say Glenn gave investigators permission to examine the phone.

The photographs depicted young female children engaging in sexual acts and modeling in the nude.

Baldwin’s phone was placed into evidence and a search warrant will be obtained to examine the phone further.

His children were quickly moved into the state’s custody.

Baldwin was also re-interviewed about the child pornography found on his phone but denied he looked at it.

He was arrested for possession of child pornography and booked into the Canadian County Jail. His bond was set at $25,000. 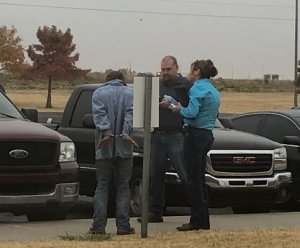 He remains in custody.

WASHINGTON (AP) — A heavy metal guitarist on Friday became the first defendant to plead guilty to federal charges in connection with the insurrection at the U.S. Capitol.

Jon Ryan Schaffer, the frontman of the band Iced Earth, has agreed to cooperate with investigators in hopes of getting a lighter sentence, and the Justice Department will consider putting Schaffer in the federal witness security program, U.S. District Judge Amit Mehta said.

ALAMANCE COUNTY, N.C. (WGHP/WJZY) — A shootout between rival Mexican cartels ended with two men dead this week, including a high school teacher, according to the Alamance County Sheriff’s Office.

(ABC4) -- The COVID-19 pandemic has, in the words of Greg Skordas, a lawyer in Salt Lake City, "created all kinds of special circumstances and special exceptions to the rules that we've always considered in employer and employee relationships."

Man ‘freaked out’ after finding snake in lettuce bought at supermarket

After lost dog found, owner says pet rescue won’t give it back

Home where Mister Rogers once lived goes up for sale

Group of Democrats introduce bill to expand Supreme Court; not all lawmakers on board