OKLAHOMA CITY — The Oklahoma Pardon and Parole Board unanimously recommended commutation with time served for a woman who has served more prison time for failing to protect her children than the man who abused them.

“I just want to tell you you guys thank you for allowing me to come this far in commutation,” Tondalao Hall told the Pardon and Parole Board on Tuesday. “I’ve worked really hard to be the woman my children need me to be.”

On Tuesday, the board unanimously voted to recommend commutation with time served.

“Normally, I’d just blow it off… don’t even want to think about it and get my hopes up. But this time, I guess I let everybody get my hopes up,” Jeff Hall, Hall’s brother, told News 4.

Back in 2006, Hall’s then-boyfriend, Robert Braxton Junior, pleaded guilty to brutally abusing two of her children in 2004.

Braxton was sentenced to 10 years in prison, with eight years suspended. He got out after only spending two years behind bars.

“The facts unavailable to the court at that time were the abuse that she suffered from Mr. Braxton. Mr. Braxton abused Ms. Hall physically, sexually, emotionally,” Megan Lambert, Hall’s attorney with the ACLU, told the board.

In a rare letter to the Pardon and Parole Board from Oklahoma County District Attorney David Prater, he referenced Hall’s 2006 testimony, which he wrote was inconsistent with previous statements regarding Braxton’s involvement in the abuse of her children. He goes on to reference a letter written by Hall to Judge Elliot in 2009, apologizing for that testimony.

“From both Mr. Prater and my knowledge, this is the only time that a district attorney has actively supported a commutation application in Oklahoma,” Lambert said.

“It changed me a little bit to even hear that. I wish we would have had that 10 years ago,” Jeff Hall said.

Family members told News 4 that Hall, a mother of three, has been resilient and hasn’t given up hope that she would one day be free.

“She’s ready to be able to come home, see her kids play sports, pick out prom dresses and you know, just have a brand new fresh start,” Nyesha Anglin, a long-time friend of Hall’s, said.

The commutation recommendation will now head to Governor Kevin Stitt’s desk for approval.

On Tuesday, David Prater released this statement to News 4:

“I wish Ms. Hall the best. She now has the opportunity to have a relationship with her children outside of prison. I’m hopeful that Ms. Hall will use this opportunity to educate women in abusive relationships to seek help before their children are abused by their violent partner. As a parent, our first priority is to protect our children. The most effective way to do that is to not expose our children to violence in the first place. If anyone finds themselves in a violent relationship I urge them to seek help immediately. In Oklahoma County, there are wonderful people at Palomar, our family justice center, who are ready to assist anyone who needs their services.”

Here is Prater’s letter to the Pardon and Parole Board: 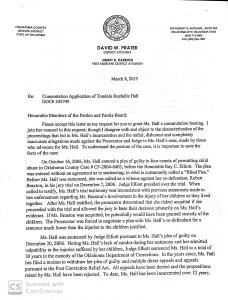 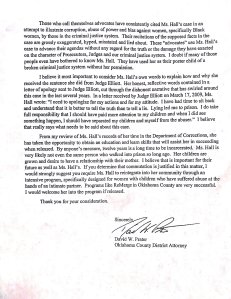 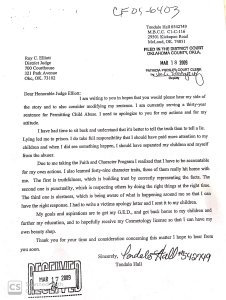 This story was updated to correct the misspelling of Tondalao. (11/8/19)