SHAWNEE, Okla. - On Thursday, a local hospital received two new patients who haven't been alive for a long time.

St. Anthony Shawnee Hospital is the new home for a pair of mummies.

Through modern technology, anthropologists and radiologists hope to discover new information about the persons under the bandages.

Curious researchers hope to find out who is behind the second mummy, an unnamed person from the Roman Era.

Both mummies are displayed in the Mabee-Gerrer Museum of Art.

The mummies were blessed by monks before being secured in climate controlled boxes, then sent to St. Anthony Shawnee Hospital for x-rays.

"We think Tutu's internal organs were taken out, mummified and then returned to the chest cavity. 20 some years ago, those were shadows, now we should know for certain, “ said Dane Pollei, director and chief curator.

After arriving at the emergency room, gurneys were used to deliver them to this 64 slice CT scanner.

"He or she has waited a long time for this," said Skinner.

Radiologists hope to confirm the sex of the mummies, but they think they're females.

"We can actually build a 3D model of what the mummy looks like, previously that wasn't possible because the resolution wasn't there," said Ryan Skinner, a radiologist.

Since they're mummies, high-dose radiation won't harm them, allowing researchers an in-depth peek inside.

The mummies transport and scans were made possible through donations.

Everyone involved will be studying the results, hoping to uncover new information about the mystery past of Tutu and the Roman mummy. 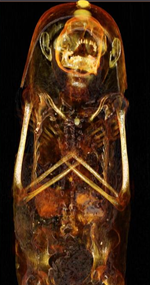 Update: On Oct. 27, 2015, we were made aware that new research shows Tutu is definitely a woman who has given birth to at least one child. Researchers believe she was between the ages of 40 and 50 when she died.

The CT scan revealed that Tutu's brain was removed through her nose. There is also evidence that amulets may be present in the body wrappings, and that all of the organs were removed, mummified, and placed back inside her body.

(WIVB) - Google Maps is rolling out a new feature that allows users to see how prevalent cases of COVID-19 are in a given area.

When you open the app, if you click on the upper right hand corner of the screen, you will get an option that says "COVID-19 info".

McALLEN, Texas (Border Report) -- The federal government has released an "Environmental Stewardship Plan" that acknowledges several species and wildlife will be "adversely affected" by the construction of 11 miles of new border wall in South Texas, but critics point out many of the wall panels are already built.

NEW ORLEANS – Tulane University football in conjunction with the American Athletic Conference announced today that its Friday, Oct. 16th matchup with SMU will now be aired live on ESPN. The game is set for a 5 p.m. kickoff.

Download the official mobile app of Tulane Athletics. Now, you can stay in touch with the Green Wave anytime and anywhere on your Android or iOS mobile device.

Follow Tulane football on Twitter, Facebook and Instagram at @GreenWaveFB. Follow Tulane Athletics on Twitter, Facebook and Instagram. WE ARE NOLA BUILTTulane University is located in the city of New Orleans. It is a city built on tradition and resiliency. The lessons Green Wave student-athletes have learned through their connection with this university and city have BUILT doctors, lawyers, business leaders, conference champions, all-conference players, All-Americans, professional athletes and NCAA tournament teams. The city of New Orleans has shaped us into who we are today. We are One City. We are Tulane. We are NOLA BUILT. Check out our story at NolaBuilt.com.