TULSA, Okla. (KOKI) – Police say they arrested a couple who were acting as ‘professional squatters.’

Authorities in Tulsa say Elisha Fehrenbach and LeCreasha Maddox were living with three kids in different foreclosed homes all across town.

Officials say they not only lived illegally in several homes owned by banks, but they also decorated the houses with stolen property. 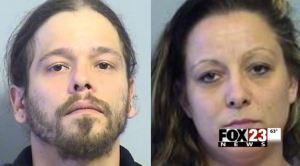 “I went around to every room and I’m like, ‘Oh my gosh, that’s all my stuff!’ It’s just so creepy,” said Shannon Mantegani.

Mantegani says a lot of her property was stolen about a week ago.

“Apparently this couple figured that no one was living in my dad’s house. He passed away this last year,” Mantegani said.

Police believe the couple broke into the fully furnished home, loaded up what they wanted and made a short drive to their next house.

“It’s disheartening that you’re already grieving your parent and then what you have left of them is stolen by some sleazebag,” she said.

Neighbors in the area had no idea the pair were squatters.

In fact, they say they were model neighbors and a blessing to the neighborhood.