MOORE, Okla. – The yearbook at Southmoore High School was given to students on Friday, and one photo is now going crazy on social media.

“Thought, what is something I can do that would be kind of off the wall that maybe a kid could look back 20 years from now and say ‘That guy was my band director?” said Adam Mewhorter, band director at Southmoore High School.

Mewhorter borrowed one of his student’s band uniforms and prepared for picture day.

The photo was taken in October, but was only recently revealed in the yearbook.

“I didn’t think anyone would care as much as they did, but immediately they started posting on Twitter,” Mewhorter said.

Now, this class clown is making waves on social media and around the school.

“When I sign their yearbook, they want me to initial my very high quality picture here,” he said. 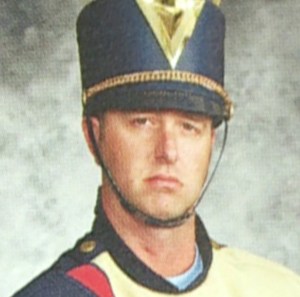 It’s a small gesture Mewhorter hopes will make a big impact on his class of more than 200 teens.

“When I went into teaching, I did not want be boring,” Mewhorter said. “I wanted to at least be memorable because it will help them learn.”

He also hopes it will make his students proud to be in band.

“I think it puts band in a good light. I think they’re pseudo-proud of my stupidity,” Mewhorter said.

Apparently, the idea has caught on around school.

Other teachers are now planning their own unforgettable yearbook picture.

But you can count on Mewhorter to step it up even more next year.

“I thought maybe a color guard uniform or setting drums on fire. It’s going to be hard to top that, but I will top it,” Mewhorter said.

Mewhorter has been teaching band students at Southmoore for the last seven years.