ENID, Okla. - Parents are demanding action after an incident at the 7th and 8th grade football game at Enid Public Schools on Tuesday.

A picture taken by a Ponca City student shows a noose hanging in the Enid High School's visitor's football locker room above a metal folding chair.

"Just disgraceful to us," said one Ponca City parent who wished to remain anonymous.

He said he had to explain to his son who saw it what he believes was the significance of the noose.

"It's a racial thing and we all know that. You don't have to be a kid of color to be insulted by that," the parent said. "This world is divided enough as we all see, and to bring the kids into it, it's personal, and it's personal with me."

When Enid school officials went to check, they said they found a chair and a USB cord with a 2-inch noose hanging inside the locker room.

Both school districts say they do not condone what happened and are working to find the person responsible.

“I was informed of this incident this morning and have been in contact with Enid administration continually throughout the day. Both schools’ athletic departments have been cooperating on this issue as well. Neither school district condones this insensitive and unacceptable behavior. The Enid Public School
district is investigating the incident, and we are continuing to perform our own investigation into this serious matter," said Ponca City School Superintendent Shelley Arrott.

A joint statement from both schools said in part:

Enid Public Schools and Ponca City Public Schools have a close working relationship and are coordinating together, with their administration and athletic departments, to investigate and address this issue. Ponca City parents notified both districts of this concern Wednesday morning, following Tuesday night’s games. Upon immediately checking the locker room, Enid school officials found a chair and a USB cord with a 2-inch noose hanging in the visitors’ locker room. Neither school district condones this behavior, which is insensitive and unacceptable. The person responsible, when found, will be held accountable for his or her actions. Additionally, we will continue to educate our students about tolerance and respect for others, in all situations. -Shelley Arrott, Ponca City Public Schools Superintendent and Dr. Darrell Floyd, Enid Public Schools Superintendent.

She said it's unclear how long the noose had been in the locker room.

Enid Public Schools included a photo of a 2-inch noose they said is the one that was found hanging in the locker room. 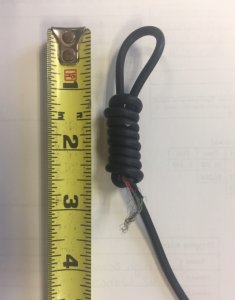 Parents say it's ridiculous, obviously much smaller than the one in the student's photo that went viral.

"They send a 1-inch noose and say that's what they found in the locker room," the anonymous parent said. "We're smarter than that. That is just totally disrespectful."

An Enid spokesperson did not comment on the difference. Arrott said neither she nor Enid schools could offer an explanation.

"Obviously it's very different and we've both talked about the differences, however Enid reported that this was the photo they had as a result of the investigation," Arrott said.

"They may never find the person who did it," the parent said, "but you know, God don't like ugly, and they'll get theirs."